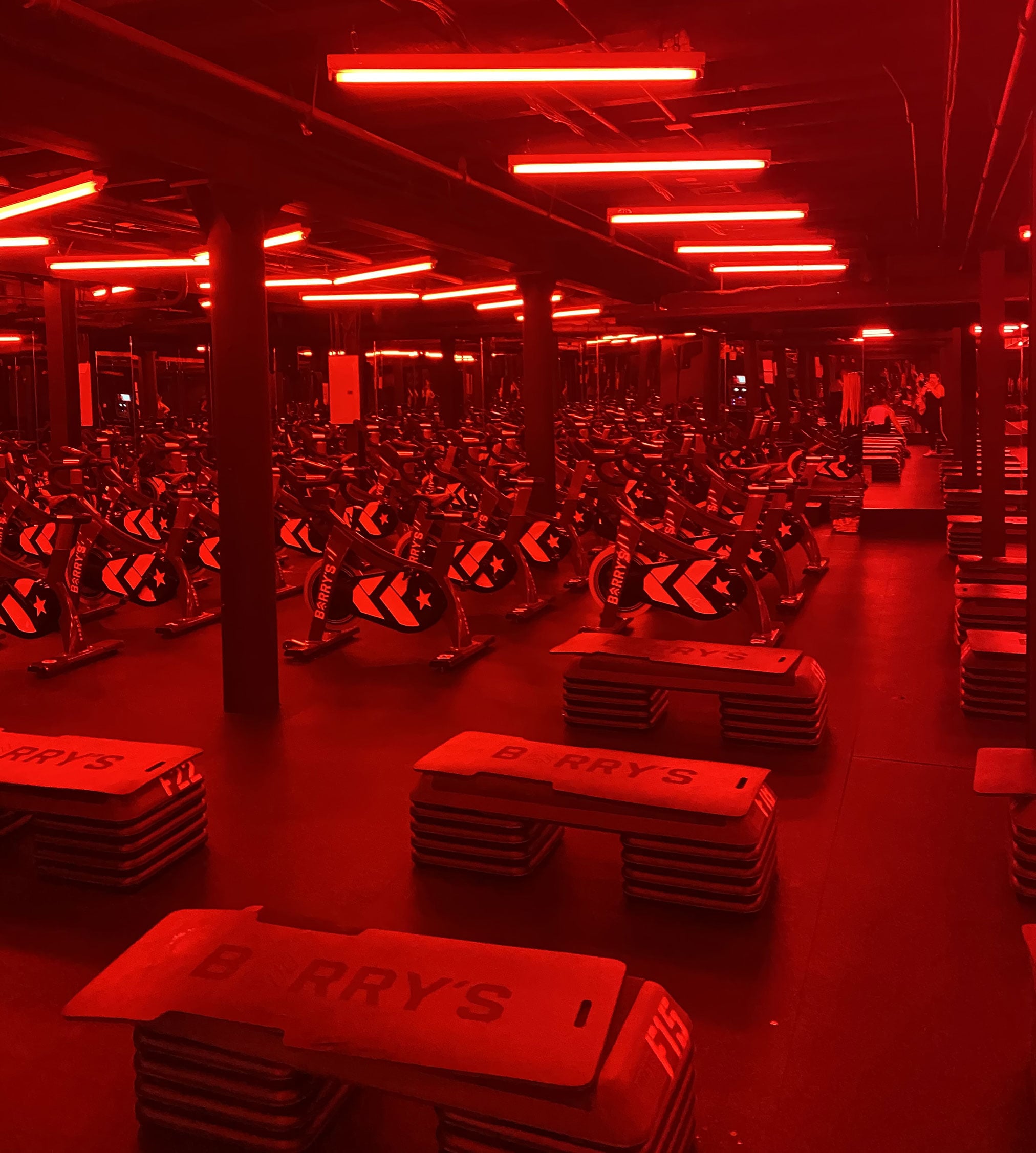 One of the biggest perks about being a fitness editor in New York City — aside from all the protein powder and low-carb snacks — is the opportunity to check out new fitness classes before they go mainstream. In this case, I got the try the new pop up from Barry's called Barry's Ride that's currently only available in LA and NY.

A traditional Barry's class mixes HIIT-style cardio on a treadmill in the form of jogging, running, and sprinting intervals with strength training on the floor, and usually includes four 15-minute blocks. For Barry's Ride, the cardio portion is performed on a stationary indoor cycling bike, not a treadmill, and each block is about 30 minutes. I already enjoy doing mixed-format treadmill classes, such as Orangetheory Fitness and traditional Barry's classes, but indoor cycling is my favourite form of cardio. So when Barry's announced it was launching Barry's Ride, I couldn't wait to check it out. Let's just say I will be going as often as I can while it's still in New York.

What Is Barry's Ride?

The 50-60-minute workout class is a mix of high-intensity indoor cycling and traditional floor work that Barry's is known for (heavy weights, resistance bands, bodyweight work, etc.). Essentially, Barry's replaced the treadmills with indoor cycling bikes. Barry's Ride is for people who like the HIIT-style cardio traditional Barry's classes offer, but want to do something more low-impact than running.

Unlike traditional Barry's classes, in which the two different groups (the floor group and the treadmill group) are working out simultaneously while the instructor goes back and forth between the two, everyone is working in the same section in unison during Barry's Ride. You start out on the bikes for about 25-30 minutes, then move to the floor for the remaining 25-30 minutes. Since there's only one transition in the class, you can keep all your stuff in one place, like under your bench (no one will be there in the meantime!); the number you've been assigned on the bike corresponds with the bench you will move to to do floor work. You also get two minutes during the transition, which gives you time to swap your cycling shoes for your training sneakers.

I was already excited to take this class because it pairs my two favourite workouts: indoor cycling and strength training with weights. When Barry's invited me to try it out, I immediately signed up for Keoni Hudoba's class. Keoni is not only my favourite Barry's instructor at my home studio on the UES — I love his motivating, yet no-nonsense approach — he also has experience as a SoulCycle instructor years ago, so I knew the cycling portion would be legit.

Since you don't share benches with other members at Barry's Ride, we were instructed to grab the weights for the workout and leave them on our benches for when we move to the floor portion (this ended up making the transition between the bikes and floor much smoother and quicker). The whole class started on the bikes, and as someone who regularly takes hard 45-60-minute indoor cycling classes, I thought 25 minutes would be a piece of cake. Wrong: it was chock-full of nonstop resistance and speed intervals, so you definitely got the most bang for your buck (and Keoni knows how to keep it challenging!). The instructor rode with us on the bikes the whole time, which I liked; it made it feel like we were all in this together. Keoni told me after class that he's better able to gauge what's physically possible for people on the bikes if he's riding with us.

The cycling reminded me a lot of SoulCycle: the playlist is fun, you ride to the beat of the music, and there is a little bit of choreography (yes, including tap backs). But I liked it more than Soul because the bikes have a display screen that tracks your RPMs, and your instructor gives you a range to stay within. It also has a sprint shifter in addition to the resistance knob, so you can really take the resistance up a lot. And like the Barry's treadmill classes, there are options for different skill levels: two turns on the resistance knob for beginners, three for intermediate, and four for advanced, etc.

So yes, I was sweaty and exhausted after the first 25 minutes, but I was still energized to take on the floor portion. I took a Chest, Back, and Abs class, and we did a lot of nonstop reps with one heavy weight: single-arm dumbbell chest presses, overhead triceps extensions, and renegade rows, to name a few. I was dripping sweat the entire time and with so many planks and plank variations (and holds!), Keoni definitely tested my patience. But like he said in class, he wants to make sure people don't waste their money.

Since I fell off a treadmill at Barry's nearly two years ago and haven't fully emotionally recovered (I'm still scared to run above a 7.5 on any treadmill), the Barry's Ride class format is perfect for me. I am counting down the days until I can come back.

Related:
Challenge a Friend to Sweat It Out With You and Take On This 4-Week Barry's Workout Plan

What Should I Wear to Barry's Ride?

You should definitely wear something you can comfortably sweat in for an hour, and like you would wear to any indoor cycling class. Think: supportive sports bra, sweat-wicking tops, and fitted leggings; if you wear long, flowy pants or capris, it might interfere with the mechanics of the bike. This outfit will also work for the floor, but you might want to make sure your sports bra is supportive enough to handle plyos — burpees aren't out of the question.

If you have your own cycling shoes, you can bring them; the bikes at Barry's support only SPD clips (not Delta). Just make sure you bring training sneakers to wear on the floor that will support you during a floor workout. You have about two minutes in the transition to change your shoes. Barry's Ride offers Shimano shoes for rent that have a recessed cleat and rubber sole, so they can be used for both the cycling and the floor portion. Shoe rental is $3.

Bring a water bottle (trust me, you'll need it), and Barry's has free towels to mop up all the sweat you'll inevitably collect on your face and arms. We got a nice little surprise at the end with cold eucalyptus towels after class.

Where Can I Take Barry's Ride?

Right now, Barry's Ride is only available as a pop up in two locations: one in LA and one in NY. In New York, it's located adjacent to the Chelsea Barry's location (135 W 20th St); just go in the main entrance and they will direct you to the studio downstairs. In LA, it's located next to the existing Venice studio (1440 Lincoln Blvd, Venice). The classes are open now until March 20; check the Venice schedule here and the Chelsea schedule here. As far as whether or not it will extend beyond March, a spokesperson from Barry's told me "we're excited to hear how the community responds, and we'll gauge next steps from there." Keeping my fingers crossed for a year-round Ride experience!

Each class has 24 bikes and corresponding floor spots. But since the whole class does the same workout at the same time, there are only 24 spots in each class. With so few slots, Barry's Ride will book up a lot quicker than the traditional Barry's classes, which have up to 50 (or more) spots.

Related:
The 1 Crucial Thing to Do During Ab Workouts, According to a Barry's Bootcamp Instructor

How Much Does Barry's Ride Cost?

Barry's Ride costs the same amount as a traditional Barry's class: $30 a class in LA and $38 a class in NY with packages available. If you previously bought a Barry's class package, those classes are still good for booking a Ride class. Yes, a Barry's Ride class is an investment, but if you like high-intensity cardio with challenging strength training, this is the class for you. And if you really want to test your limits, take Keoni's class: he'll make sure you get every penny's worth. 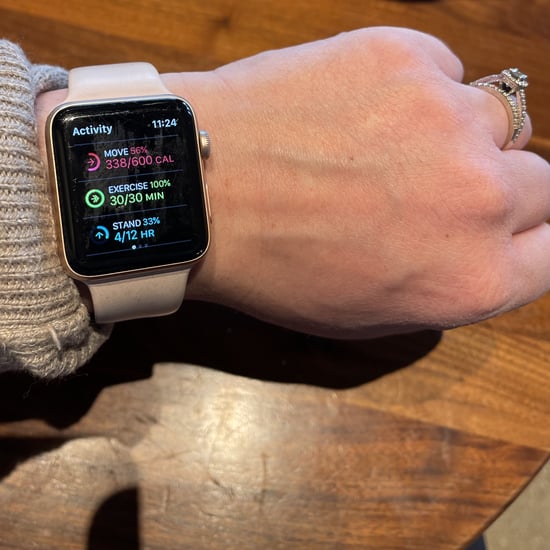 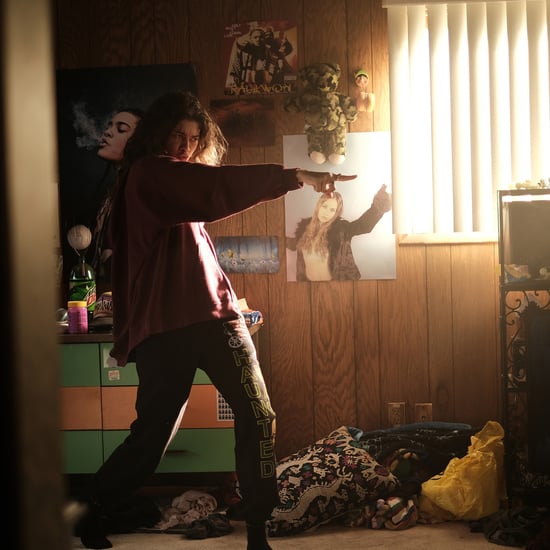 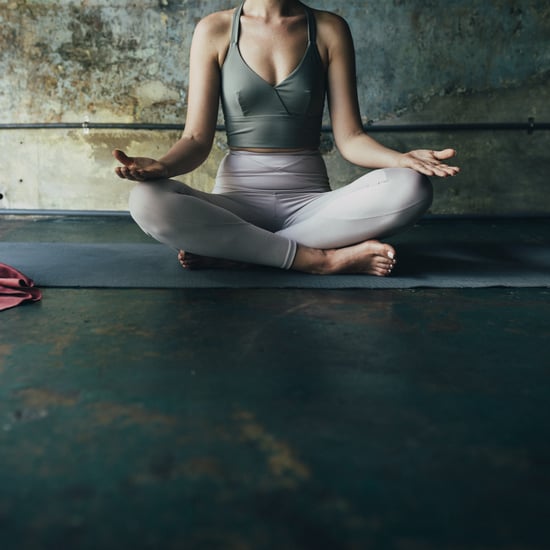