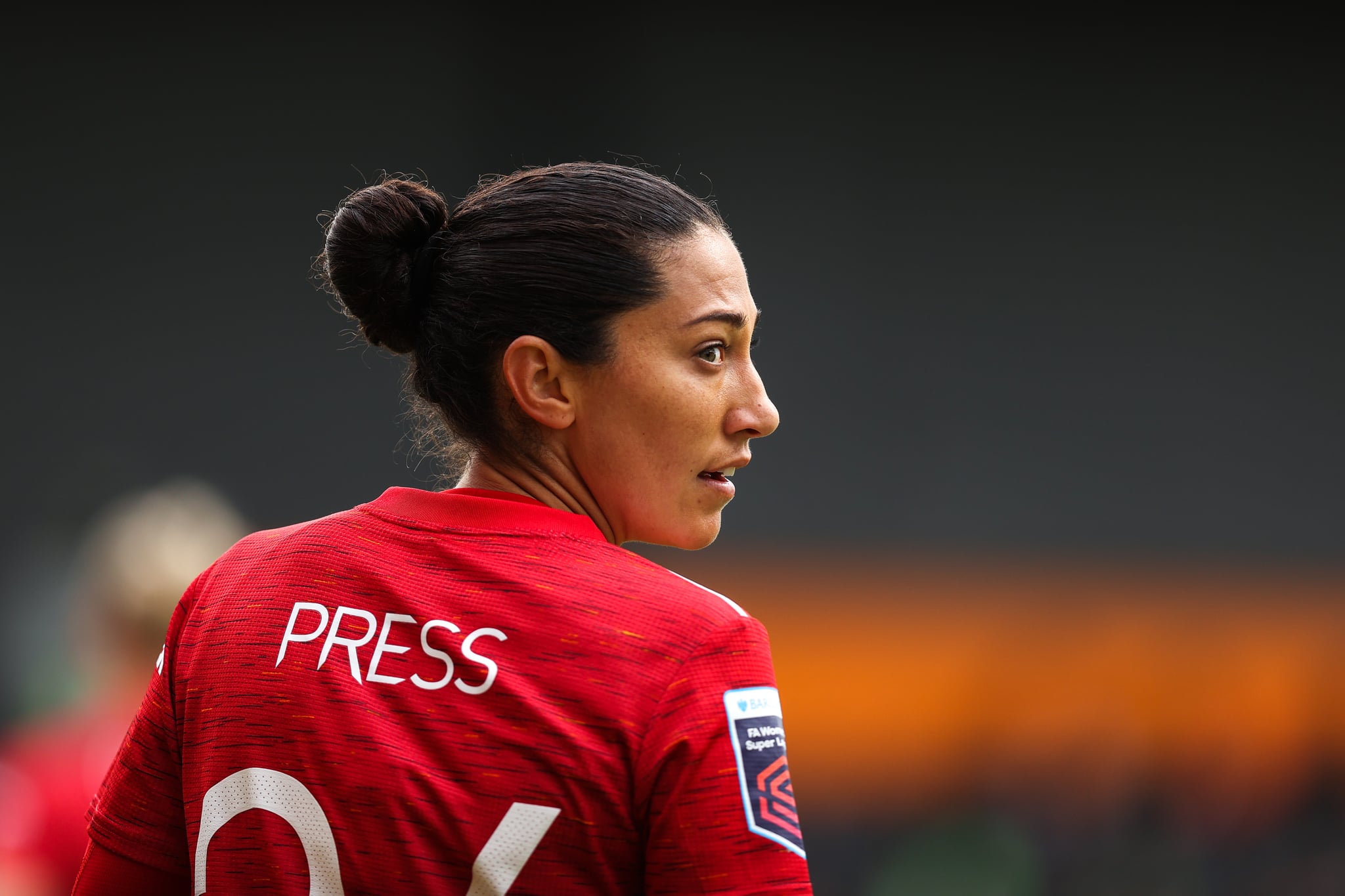 In September, Christen Press picked up her life and moved across the world. "It's not the first time I've made that choice for football," the US Women's National Football Team (USWNT) star and Re-inc cofounder told POPSUGAR, but it was certainly the first time she'd done so in the middle of a global pandemic. Press had never been away from football as long as she had during self-isolation, having opted out of the NWSL's Challenge Cup due to concerns about COVID-19, and was longing to return to the field when she got the opportunity to play for a legendary club: Manchester United.

"This has been such a wonderful experience," Press said of her time with Manchester so far, where she's joined by fellow USWNT stars like Tobin Heath, also at Manchester United, and Alex Morgan at Tottenham. "I am taking each day as it comes, because this year has taught me that everything is transient," Press said.

"If you had told me six months ago that I was going to be here, I wouldn't have believed you."

Even as the pandemic threw sports schedules off course, athletes used their power and their platform to speak out against racial injustice. Games in nearly all active American sports leagues were postponed; NBA players considered calling off the postseason. The movement left a lasting impact on how we view the role of sports in society. For Press, it meant she felt "a duty to call for change," posting a passionate message in support of Black Lives Matter and urging people to do the challenging inner work that leads to a "lifetime of activism." Press is one of the only Black women on the USWNT, which she said is due to systemic, historical discrimination and a lack of opportunity.

"My parents always asked of me to do more, to try to make the world a better place."

The summer's social-justice movement, brought on by the police killing of George Floyd and the shooting of Jacob Blake, was a "wake-up call for a lot of people," Press said. "My parents always asked of me to do more, to try to make the world a better place, and to try to help other people that look like me feel like they have a place in the world or an opportunity. I take that very seriously, and it is probably the part of my career that I am most proud of.

"This year has been so challenging for so many different reasons," she added. "But the social activism and the power that people have felt in their own ability to create change is absolutely the silver lining."

No member of the USWNT can be a stranger to activism. The team is known as much for their fight for equal pay as they are for their dominance on the field, and a group of players, including Press, famously sued US Football for gender discrimination before the World Cup last year. They took a blow in May, when a judge ruled against their equal-pay claim, but the team immediately announced plans to appeal.

"When we decided to take legal action, the decision was made with the consciousness that this was going to be really hard," Press explained. "We felt it was essential for us to take on this lawsuit, because we are resilient, and it would be hard. A lot of marginalized groups don't have the privilege that we have, honestly, to be able to take on an exhausting battle that we're in."

"If it was going to be easy, someone would have already done it."

As much as we laud USWNT players for their activism, one thing often gets missed: the very sexism that causes many women athletes to feel, as Press put it, "like we have to be more than athletes." It's not enough to simply play their sport, as men do; they must also fight for their right to be respected and paid their due. They have to "do it all," a phrase so many women are familiar with and a classic symptom of "the cultural pressure that's put on women to be perfect," Press explained.

At the same time, that is still her experience, and Press embraces and owns it, using her platform to "call attention to the areas in the world that we want to make better." Equal pay and racial justice are just the start.

"If it was going to be easy," Press said simply, "someone would have already done it."