A lot has changed since viewers last saw Lauren Speed and Cameron Hamilton on Love Is Blind. Though the telegenic couple is as sweet as ever, their Atlanta home has undergone quite the transformation so that it no longer resembles the barren bachelor pad originally shown in the unconventional dating series. As much was made clear in a recent home tour Lauren and Cameron put together for Netflix, which also offered a nice update on how they're currently doing.

"It's a lot different than in the bachelor days."

"As you can see, it's a lot different than in the bachelor days," Cameron said while gesturing to their new and improved living room. "More than just this couch, we've actually got curtains now. We've got decorative pillows. We've got roses on this really awesome mirrored coffee table that Lauren had in her apartment." Decorative pillows — a telltale sign of cohabitation! Cameron added, "It just feels a lot homier than it was when it was just me, and I love that."

The home tour took a very relatable turn upon discussing the topic of, uh, retiring some of Cameron's belongings. "I feel like you just had a few things you wanted to get rid of," Cameron said, to which Lauren responded, "Oh, your stuff?" Cameron quickly added, "All my stuff, obviously . . . Not all my stuff, but the things that were tossed, were my things." 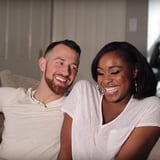 A few other sweet tidbits: Lauren and Cameron keep a work of fan art depicting their first kiss by their staircase. "It just captures one of the best moments of my life so beautifully," Cameron said, adding, "I still think about that day all the time." In another moment, Lauren and Cameron stand on the balcony and reflect on their conversation about the future in that very same spot during the filming of Love Is Blind. "Now here we are together, living here as husband and wife for almost a year and a half now," Lauren said.

Watch the tour above, and then feel free to browse Lauren and Cameron's cutest pictures together if you feel like swooning some more.