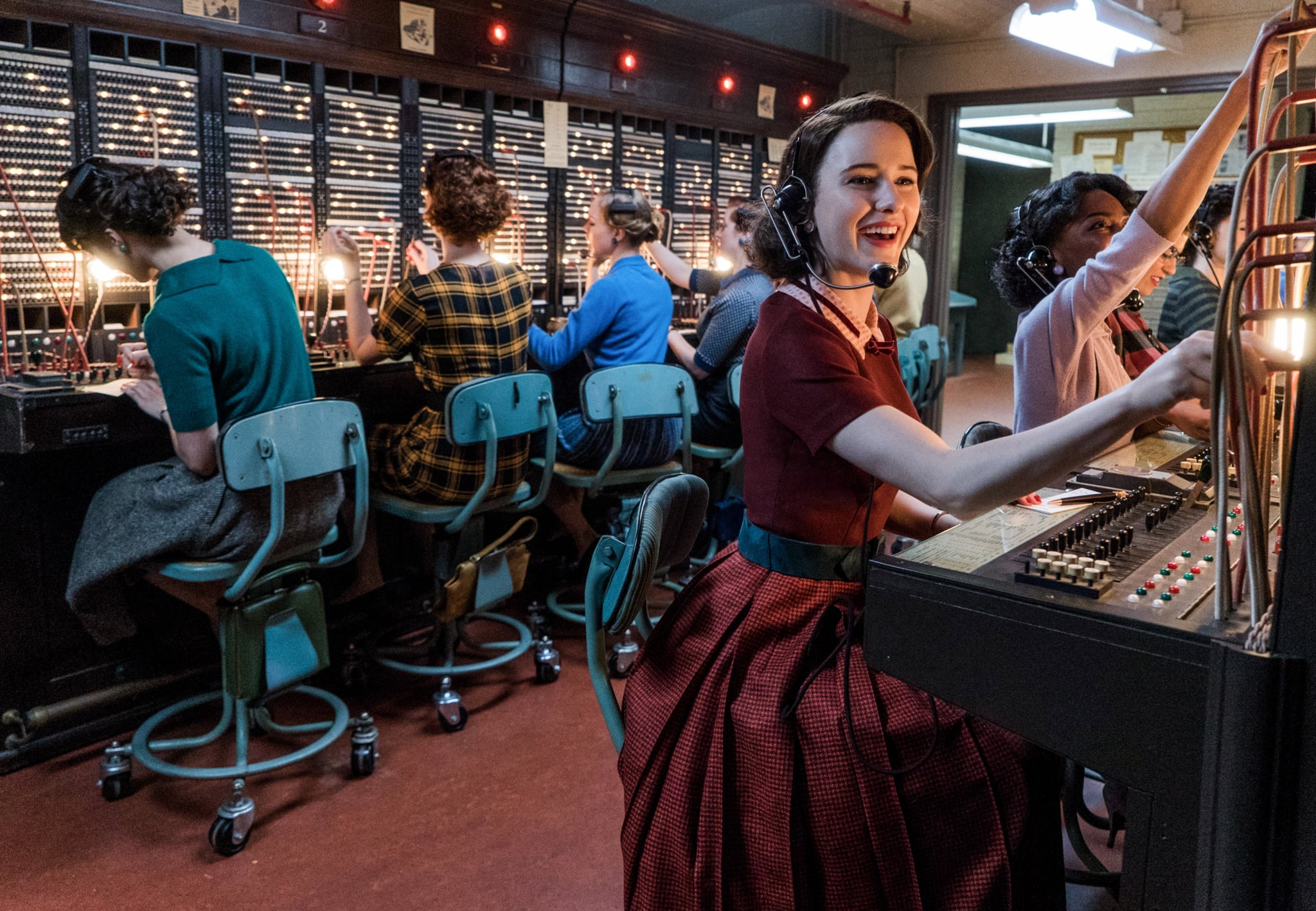 I didn't have childcare arrangements for my final class of the teaching semester. My usual sitter had a final exam, relatives were working, and back-up sitters weren't around. I called my eldest son's nursery school and arranged to pay the fee for him to stay late, but I had no one to watch my 10-month-old. I emailed the office to inform them I would have to bring my infant to class. "Sounds like you have taken into consideration that there should not be a disruption in your students' learning," the English coordinator responded. "So it should be all right."

"I rarely see TV shows that capture the gritty truth of a working mother's experience."

I did my best to occupy my son, who whined and thrashed in my arms. I let him crawl on the dirty floor, while listening to my students read from their memoir essays. Halfway through the class, I had to excuse myself to change his diaper on the floor of the women's bathroom; my office was full of other instructors meeting with students and there were no changing tables or family bathrooms available. The whole scenario felt right out of a sitcom, as my son tried his darndest to escape the small pad separating his bare bottom from the restroom tile, except I rarely see TV shows that capture the gritty truth of a working mother's experience.

Mothers have faced scrutiny and discrimination since they've pursued equality in the workforce. Today, 70 percent of mothers with children under the age of 18 work outside the home. In the 1960s, only 11 percent of women were the breadwinners compared to the 40 percent of working mothers who are the sole or primary household earners today, but policies like paid leave or proper nursing rooms to accommodate working mothers lag far behind the sheer number of us in the workforce.

Last year, 102 women were elected to Congress, several of whom have young children. Change on Capitol Hill began with the installation of nursing stations and changing tables, but extensive reform is needed to keep women in positions of power. 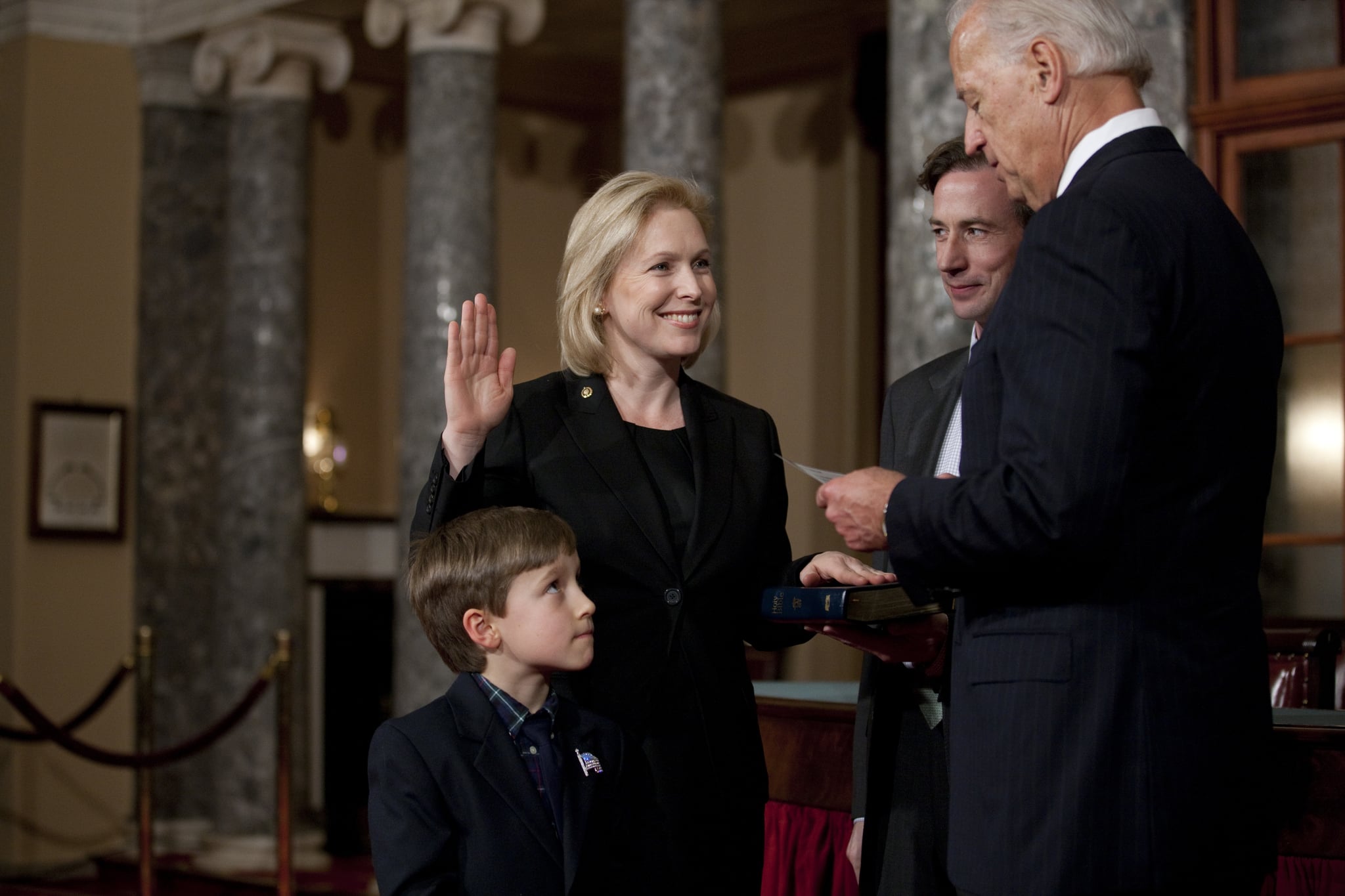 Senator Kirsten Gillibrand reenacts her swearing-in ceremony with her family by her side. Photo courtesy Getty Images.

A current policy bans lawmakers from using official funds on childcare needs, but the congressional schedule makes it difficult for parents to get home to relieve sitters or have dinner with their kids even three times a week. A single mother to three school aged children, like California Democrat Katie Porter, needs childcare before and after school and during the many overnights, which could easily overwhelm her salary. Many women, like Senator Gillibrand, move their families out of the home states they serve to D.C. and enroll them in local schools because of the time commitment expected. 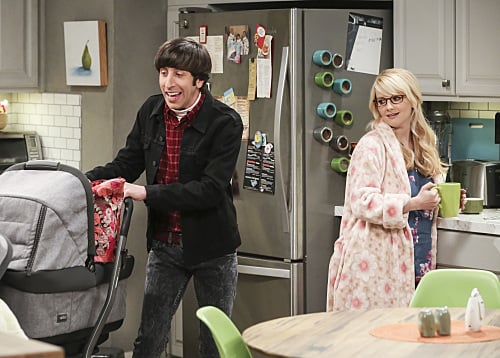 Howard and Bernadette dote over their baby on The Big Bang Theory. Photo courtesy CBS.

As is our reality, pop culture often reinforces stereotypes that make it difficult to advocate for the reform working mothers need. In wildly popular shows like The Marvelous Mrs. Maisel and The Big Bang Theory, children hardly factor into the storyline or, in some cases, are reduced to mere whines in the distance. It's easy to forget Howard's wife, Bernadette Wolowitz, has any children as a working mother.

Midge Maisel, an embodiment of the privileged elite, is more mythical than marvelous as she's never had to drag her kids to a nightclub because of a childcare conflict, and hardly receives pushback from her husband, parents, or community for the amount of time she spends away from her children working both a day job and a night gig. At the end of season two, when Midge decides to accept an offer to perform on a world tour for six months, she does so without hesitation or consideration for her children. As refreshing as it is to see a woman make a bold career move without thought of the family she leaves behind, it's grossly unrealistic and problematic, especially when it hurts real working women with all-encompassing careers who need employers who respect familial responsibility. As a mother watching in 2019, the scene feels highly unlikely given it's set in the late '50s. Careers like Mrs. Maisel's exist — see music artist Pink on tour with two kids — which is why it's that much more important our television breathes life back into these real-life complicated scenarios.

It may say something that many of the contemporary shows honouring the complex reality of working motherhood are produced outside of the country. In the British sitcom Catastrophe, Sharon — a grade school teacher and new mom of two — begs her principal to let her come back early from maternity leave after months of isolating childcare at home and a bout with postpartum depression. She has no qualms complaining about the drain her children pose on her body, sex life, and overall well being. 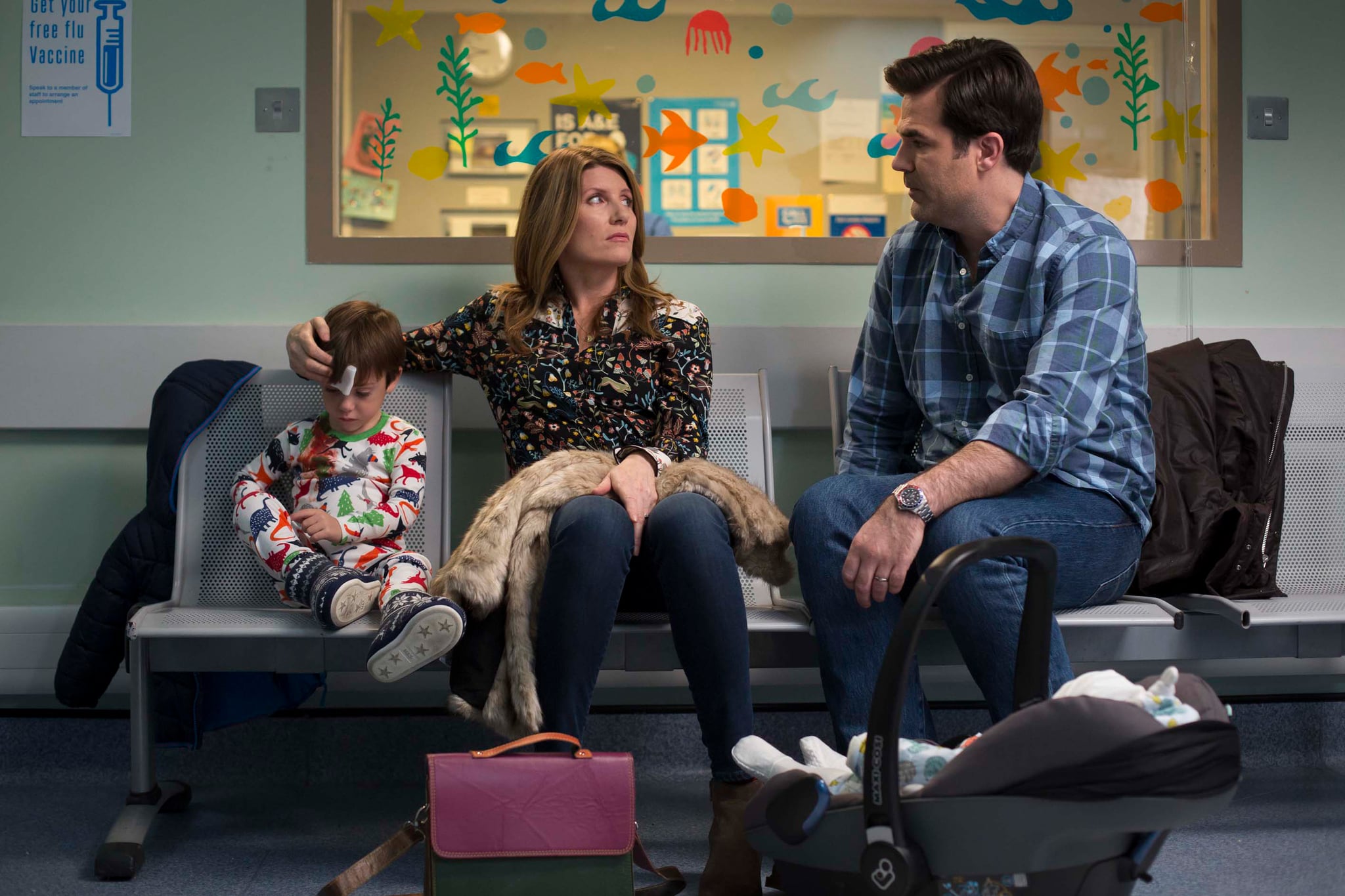 If American entertainment portrayed more complexity facing parents in the workforce, maybe the women in Congress will have less of an uphill battle trying to pass reasonable family leave that sustains a working family. For example, in Australia's The Letdown, mothers are judged if they don't work and judged if they work too much, and stay-at-home moms are denied participation in career day at their child's school, which feels a bit more real.

"Little will be done in way of real reform in our government policy if popular culture doesn't accurately reflect our reality."

Many of the policies put forward recently that seem like a great step for families and working mothers fall egregiously short. Ivanka Trump's six-week family leave proposal, which would deplete Social Security benefits even farther for a generation that isn't guaranteed any, simply won't cut it. Senator Amy Klobuchar's former plan, for parents to work three times the leave they took—or pay it back— certainly wasn't it either.

Though we're at an all-time high record for women in the workforce, America is still the only developed nation without a mandatory national parental leave across the board from employers. More exposure to the reality we face in entertainment will help to address the other large issues that continue to harm working mothers today, such as the large gender and racial wage gap, or the scarce availability and affordability of good childcare. Something American television could use more of are working moms maintaining both identities: as caretakers and contributors to their communities, as women who adore their children and sometimes resent the burden they place on their lives. If TV better reflects our reality, maybe our political leaders will be more motivated to address it. 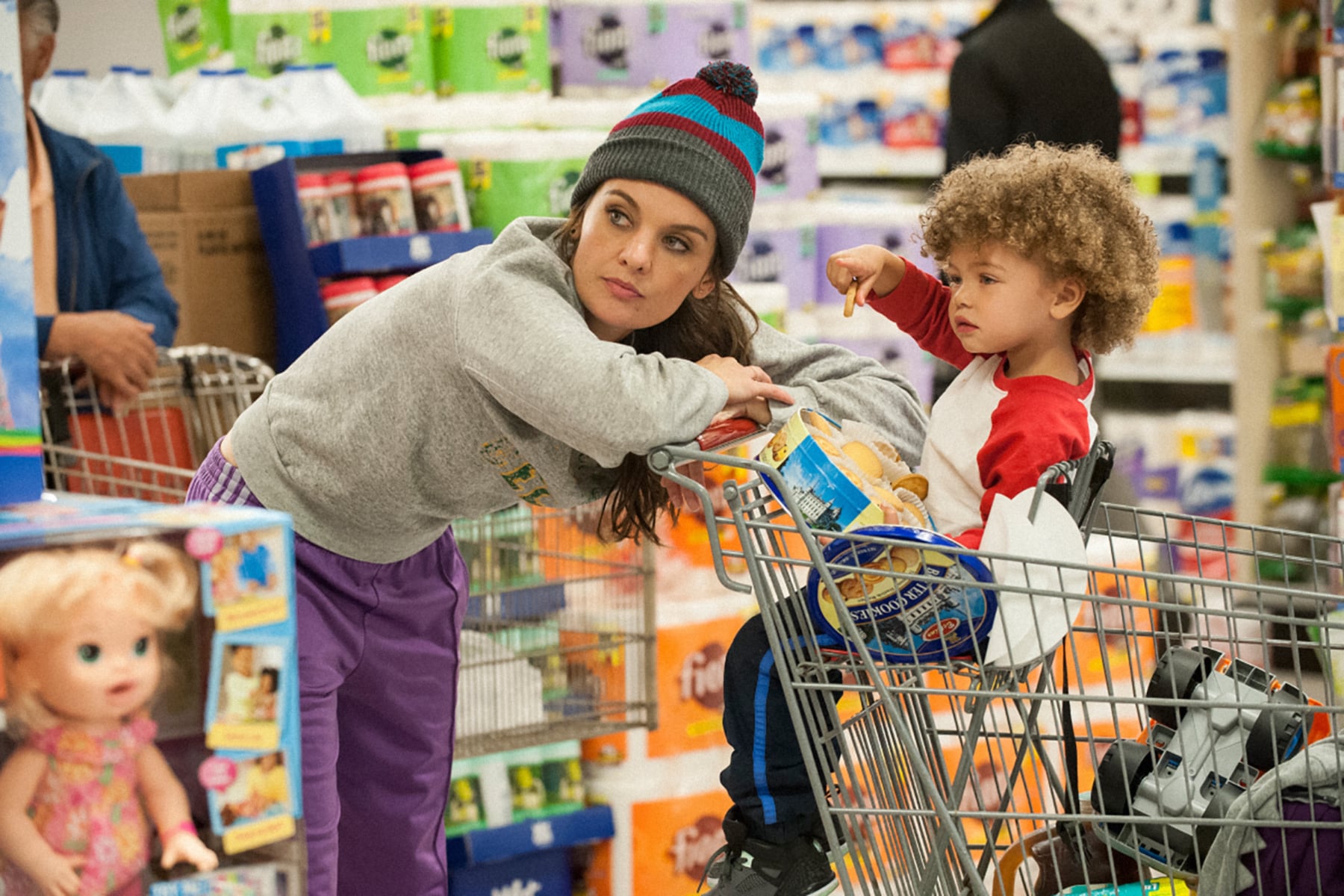 There are some US television shows that are helping the cause. SMILF's struggling single mother Bridgette often has to tote toddler, Larry, to her tutoring job and once had to leave her son with his father's girlfriend because he had to see the doctor when she had to work. Homeland's Carrie is another example of a woman striving to balance motherhood with her demanding career as a freelance ex-CIA agent. Eventually, she surrenders custody to her sister after her job overruns her ability to provide a safe environment for her daughter. This is Us' Beth, mother of two, asks husband Randall to drop out of a political race when it seems unlikely he'll win. This moment becomes an issue in their marriage after he promised to give her the time to put her career first for once. Allowing women to make these choices on screen opens possibilities for other women to make difficult work decisions in their own lives — and helps hold fathers accountable as equal partners in childrearing.

American politics and popular entertainment often hinge on the family, but gendered policies and outdated tropes hurt families. When a baby is born, most men still have limited opportunity for parental leave and those who do, don't tend to use it. Mandatory paid parental leave for fathers helps women get back to work sooner, keeps them on a leadership track, and prevents gender discrimination in the hiring process. On average, only 13 percent of companies offer paid parental leave and men are unlikely to take more than two weeks because of peer pressure attitudes in the office. Like family leave, a nationwide policy should mandate that all public men's restrooms include accommodations for changing their children's diapers. Even as we expect more of fathers than we have in previous generations, we haven't made necessary changes that encourage stay-at-home fatherhood or won't harm a two-father family. In Canada's Workin' Moms, there is a stay-at-home father who enjoys raising his daughter while his wife goes to work.

I spent the drive home from the last day of class worried over my student evaluations. I imagined a few would mention my son on the last day and how it made me less professional than other instructors, affecting my desirability to be hired by the college as an adjunct in following semesters. By the time I got home and picked my oldest up from school, I reconsidered the benefits of bringing my child to a college class. I showed my students that you can have a career and a family, you can teach a class and parent at the same time, and that working motherhood is complicated, but most importantly possible. When I checked my student evaluations, not one mentioned my infant. In fact, one student said, "she is really professional and competitive."

Little will be done in way of real reform in our government policy if popular culture doesn't accurately reflect our reality. And as our policies continue to fall behind our growth as a society, it becomes easier for this misrepresentation in our entertainment to continue. It's time to stop celebrating when a show features a female protagonist or when Congress has a record number of women elected, and start fighting for a world where a woman can run a company and a household — even a country — in all the complexity that entails, without scaling unnecessary hurdles that intend to stand in her way.

Euphoria
Did You Catch That Game of Thrones Easter Egg on Euphoria?
by Monica Sisavat 21 hours ago