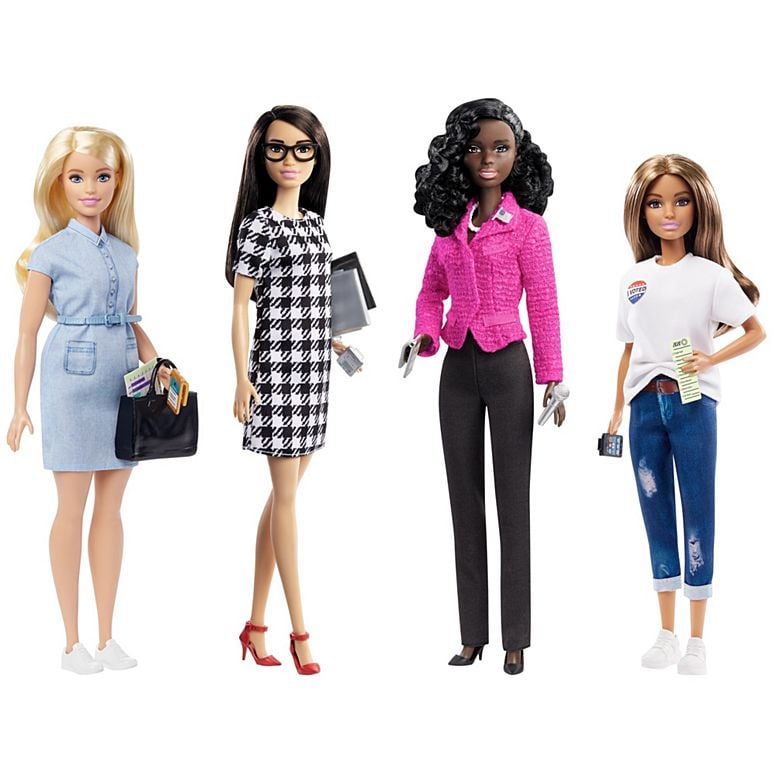 All the Career of the Year Campaign Team Dolls

Fun fact: Barbie has released seven dolls that "ran" for political office since 1992. And the brand's latest creation, Barbie Career of the Year Campaign Team Giftset ($40), is meant to inspire the next generation of voters. Composed of four female dolls, the line includes candidate Barbie, campaign manager Barbie, campaign fundraiser Barbie, and, of course, voter Barbie.

Ahead of the 2020 election, Mattel is partnering with She Should Run, a nonprofit organisation that encourages women of all backgrounds and political leanings to run for office.

"Since 1959, Barbie has championed girls and encouraged them to be leaders whether in the classroom, community or someday, of the country," Lisa McKnight, Mattel's SVP and Global Head of Barbie & Dolls, said in a press release. "With less than a third of elected leaders in the U.S. being women, and Black women being even less represented in these positions, we designed the Barbie Campaign Team with a diverse set of dolls to show all girls they can raise their voices. Our goal is to remove barriers to leadership by giving girls the tools to imagine and play out their future roles."

Get a look at the brand-new line, which will definitely inspire the next generation to not only vote but also change the world!

Related:
This Mum Nailed What It's Like to Watch Your Kids in the Summer in a Hilarious TikTok
Previous Next Start Slideshow
ToysLittle KidsKid ShoppingBarbie