Despite the fact that Jennifer Garner and Ben Affleck are no longer together, I applaud them for keeping things amicable for the sake of their family. On Thursday, the former couple — who were married from 2005 to 2018 and have three kids together — were spotted out together in LA. The 46-year-old Triple Frontier actor kept things business casual in a blue blazer and jeans, while Jen looked stylish in an ivory sweater, black trousers, and snakeskin heels. The exes appeared to be in good spirits as they chatted and Ben showed Jen something on his phone — perhaps he's thinking of getting another tattoo and wanted Jen's opinion?

Earlier this month, Ben stopped by The Ellen DeGeneres Show to promote his new Netflix film, Triple Frontier, and opened up about his famous phoenix back tattoo. You know, the one he initially claimed was fake! Ben admitted that he's seen the negative comments about it but that the tattoo "represents something important" to him and he loves it. The actor recently rekindled his relationship with Lindsay Shookus, while Jen has been dating tech CEO John Miller since the Spring of 2018. 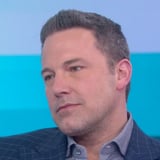 Ben Affleck Candidly Speaks About His Struggle With Alcoholism: "It's Part of My Life"
Previous Next Start Slideshow
Jennifer GarnerBen Affleck

Celebrity Interviews
I Can't Stop Thinking About J Lo Relentlessly Dragging Ben Affleck's Back Tattoo
by Danielle Jackson 30/7
PDA
J Lo and Ben Affleck Re-Created Their Famous Yacht PDA, and They Have to Be Trolling Us Now, Right?
by Grayson Gilcrease 26/7