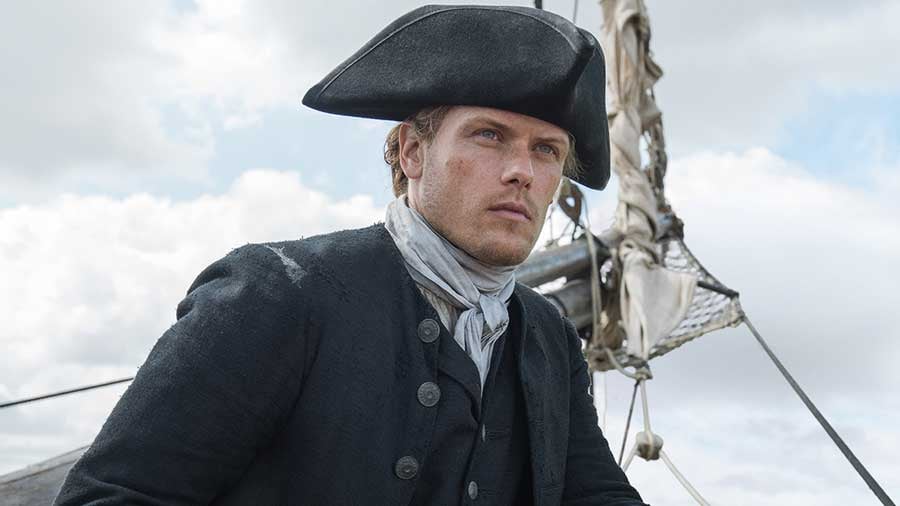 For five seasons, Outlander fans have been swooning left and right over Sam Heughan's portrayal of Jamie Fraser on the drama series. He's a near-perfect hero — as executive producer Matthew B. Roberts joked with us on set back in 2016, "Jamie, let's face it — he's a pretty awesome guy. He does most things really well. He's handsome. As far as we can tell, he gets seasick and he can't wink. These are his flaws."

"That's a tough character to write," Roberts added with a laugh. But the Outlander writers have done an awesome job of making Jamie come to life on screen, buffeted by Heughan's strong-yet-vulnerable performance.

If you're a book reader like us, you're positively giddy at what is coming up for Jamie as the show gets further and further into the book series. But if you're not familiar with Diana Gabaldon's novels and would like to know the amazing things you can start dreaming about, look no further. We're here to preview the major events of the books. But do be warned of spoilers — stop reading if you don't want to know.

For a primer on the remaining events of Voyager, read our post here. Everything in book four and beyond is ahead!

In book four, Jamie, Claire, Ian, and Fergus have washed ashore in South Carolina. As they make their way to the North Carolina plantation owned by Jamie's Aunt Jocasta (who will be played by the amazing Maria Doyle Kennedy of Orphan Black fame), the group encounters the dastardly Stephen Bonnet.

Jamie helps him escape, believing him to be a friend of one of Jamie's former Ardsmuir prisonmates. But later, that decision will prove tragic, as Bonnet robs them of the remaining treasure and money they had and turns out to be the man who rapes Brianna (when she travels back in time to warn her parents after finding their death notice in an old paper).

Upon arrival at River Run, Jamie quickly realises that his aunt wants to name him her heir (to keep would-be suitors from sniffing around her estate). But he doesn't want that and politely declines. Instead, he takes an offer to settle a tract of land nearby on the condition that North Carolina's Governor Tryon may call on Jamie at any time if he is in need of Jamie's service.

As they settle other ex-inmates from Ardsmuir Prison on Fraser's Ridge (remember, all of Jamie's prison companions were shipped off to the Colonies, so this is where we think we'll see Murtagh again), Lord John Grey pays Jamie a visit with his "step-son," William, giving Jamie a chance to spend time with his son. 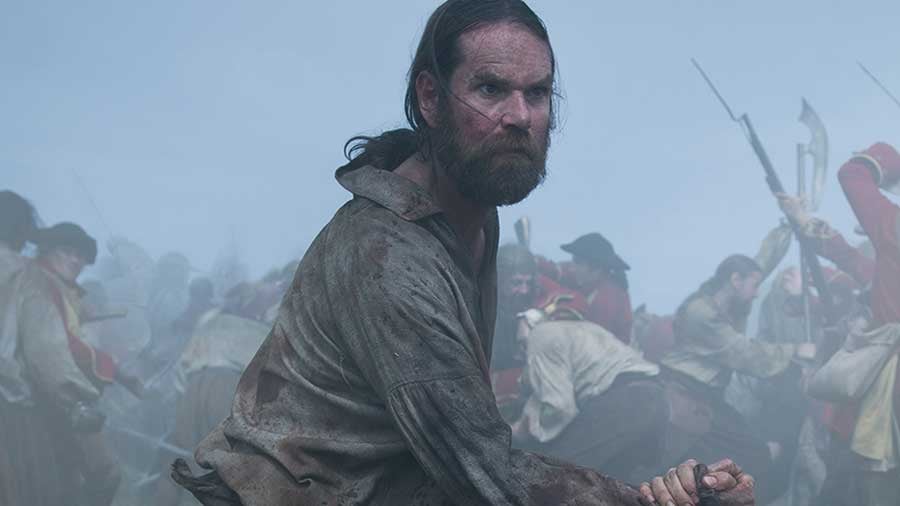 And that's not the only child he meets in this book. While Jamie and Claire are settling in North Carolina, Brianna appears at Lallybroch in 18th-century Scotland, looking for her mother and father. After a long journey in which Roger Wakefield catches up with her and the two of them are married, she arrives at Fraser's Ridge. Due to a misunderstanding, Jamie thinks it is Roger who raped Brianna (instead of Bonnet), and he beats Roger to a bloody pulp, then hands him off to some local Native Americans as a prisoner.

When the misunderstanding is realised, Jamie, Claire, and Ian manage to rescue Roger (and Ian ends up taking the place of a dead Mohawk tribe member within the tribe), then they (minus Ian) return to River Run, where Brianna has just given birth to a son, Jeremiah (Jemmy), whose biological father could be either Bonnet or Roger. Roger says he's the boy's father no matter what the paternity might be.

Governor Tryon calls in his chip with Jamie, ordering him to form a militia. The militia leaves Fraser's Ridge for only a month, however, before Tryon sends a message that it is to be disbanded (for now).

When the family attends Aunt Jocasta's wedding at River Run, they again encounter Stephen Bonnet, this time working with an accomplice to try to rob Jamie and Jocasta. They're looking for the gold King Louis XV had sent to Bonnie Prince Charlie to aid in the rebellion, but Jamie and Jocasta don't have it.

The militia, calling itself Fraser's Company, is reformed in the Spring (it is now April 1771). As they engage in the Battle of Alamance, Roger is wrongfully hanged as a rebel and Jamie must rescue him, barely saving Roger in time. They return to Fraser's Ridge and continue to struggle with the daily hardships of frontier life.

In Spring 1772, Roger and Jamie go on a mission to find and kill Stephen Bonnet, but they miss their chance and Bonnet actually finds Claire, Brianna, Marsali, and the children. He attemps to kidnap Jemmy, whom he believes to be his son. Brianna saves her son by shooting Bonnet, who runs off, wounded.

A Breath of Snow and Ashes

Jamie becomes what was known as an "Indian agent," or someone authorised to interact with Native American tribes on behalf of the US government. He also decides to form a Committee of Safety for his tenants at Fraser's Ridge. Committees of Safety were real organisations during the Revolutionary War. They were made up of Patriots (those fighting against the British crown) whose purpose was to act as governing bodies, deriving authority from provincial congresses (which would later become US states). Basically, a Committee of Safety was one of the first forms of local government in the US.

Jamie frequently travels around the area, helping tenants and parlaying with the local Native Americans. During one of the trips, Clarie is kidnapped by a group of criminals that includes a fellow time-traveller named Wendigo Donner. While captive, Claire is assaulted and raped. Jamie, Ian, Fergus, and Co. eventually rescue her, slaughtering nearly all the men involved in the process.

As the events of the Revolutionary War get underway, Jamie stops working as an Indian agent for the government and begins to work in secret for the rebels (the Patriots). In February 1776, he gathers up the men of Fraser's Ridge, and they march to Wilmington to join the rebel militias. But after fighting for a few months, Jamie returns to Fraser's Ridge and the family sets about sending Brianna, Roger, Jemmy, and their new baby, Amanda, back through the stones because of Mandy's life-threatening heart murmur, which cannot be repaired in the 18th century. 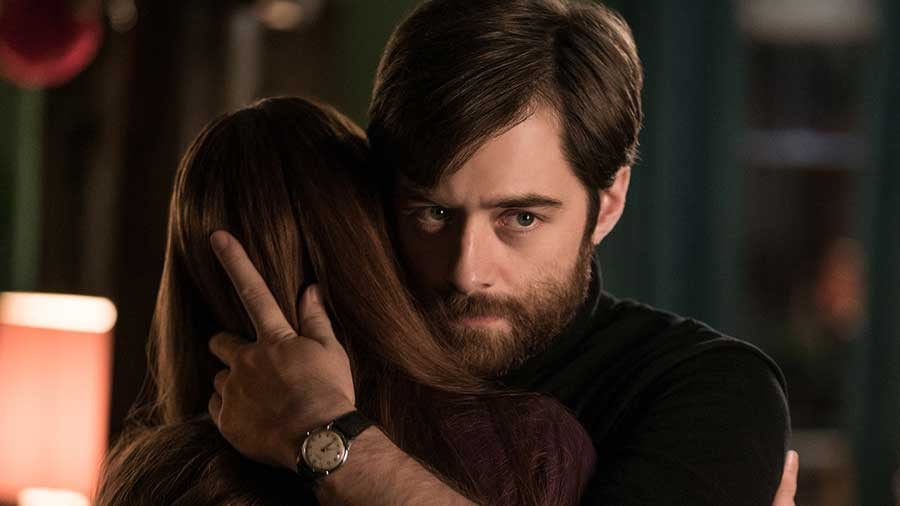 After they leave, Claire and Jamie still have to deal with Donner and his companions, looking for gemstones because they help with travelling through the stones. The men loot Jamie and Claire's big log cabin house and end up dying in a fire that Ian sets. With the house and their family now gone, Jamie says he and Claire must return to Scotland to fetch his printing press.

If the show reaches this point, which would be the season six finale, this might be where Starz would consider ending things. It's a huge turning point in the novels and could make for a natural ending if the network doesn't want to pursue seasons seven, eight, nine, etc.

An Echo in the Bone

Of course, nothing is ever easy for Jamie and Claire. As they set sail with Ian aboard the Tranquil Teal, they are approached by a British naval ship that presses Jamie and Ian into service. The three of them (because Claire never leaves Jamie to go off and have adventures without her) eventually are able to extract themselves from the British and join a rebel militia. Claire is welcome there because of her medical expertise. When Jamie's cousin, Simon Fraser, is killed in battle, General Gates asks Jamie to take the body back to Scotland, so Jamie, Claire, and young Ian do eventually set sail for Scotland.

They reach Lallybroch in early 1778 only to find that the elder Ian Murray — young Ian's father and Jamie's best friend — is dying. They prepare to stay for a while, but Marsali writes from America that her son, Henri-Christian, who was born with what was then referred to as dwarfism, requires life-saving surgery. So Claire and young Ian say their goodbyes and sail for America; Jamie stays with Jenny and Ian until Ian dies. 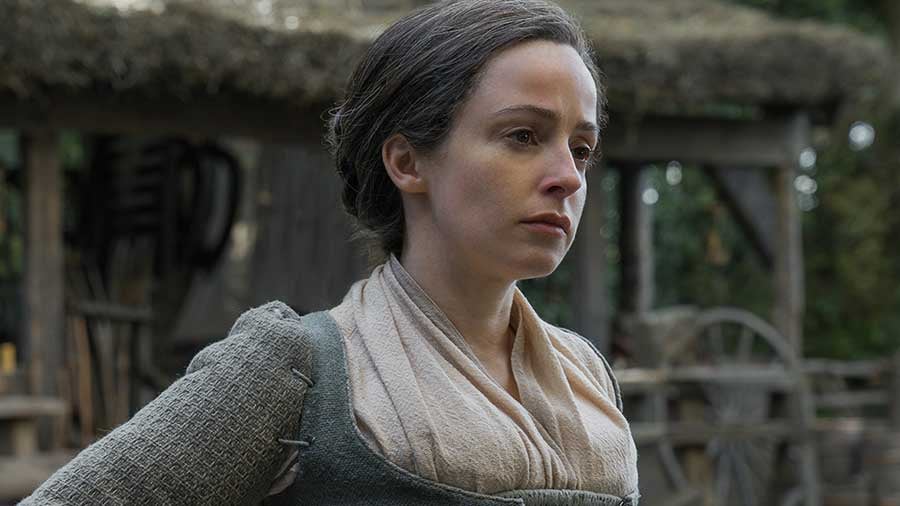 Then in what is quite a surprise, Jenny, who has never really left Lallybroch, decides to sail for America with her brother. Jamie books passage for them on the Euterpe, but they miss that boat and must take another one a few days later. When the Euterpe sinks en route to America, however, Lord John and Claire back in the States believe Jamie to be drowned at sea. A British captain intends to now arrest Claire as a spy, so she marries Lord John for protection. 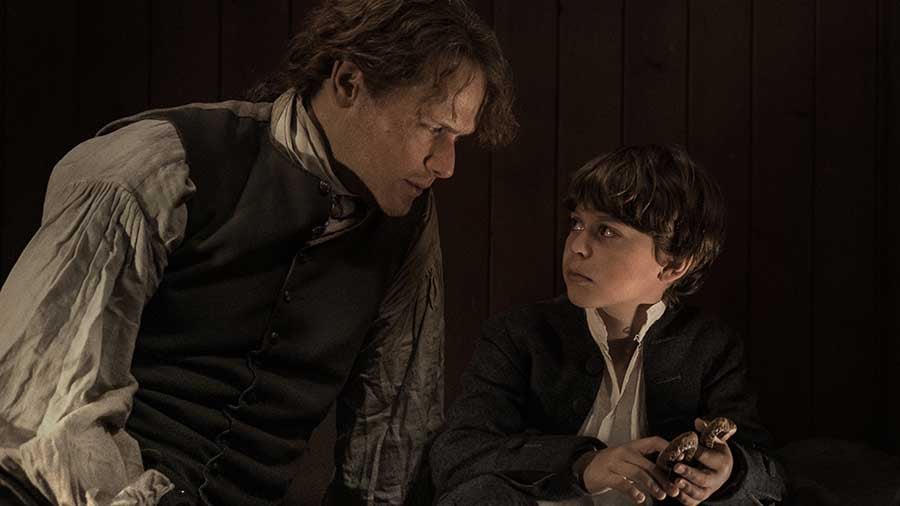 When Jamie does arrive in Philadelphia, he goes to get Claire from Lord John and instead encounters a grown William, who realises that Jamie is his biological father because the resemblance is too hard to miss. Jamie also finds out that Lord John and Claire have been intimate in his absence.

Oh, and while all this is happening in the 1770s, Roger and Brianna think Jemmy is being kidnapped in 1980 and taken back to 1739 to find his grandfather's gold. Roger gives chase, though Jemmy is not actually in 1739, and then later Brianna, Jemmy, and Mandy follow him.

Written in My Own Heart's Blood

Jamie and Claire are reunited (again) in Philadelphia and join General Washington's army (yes, that General Washington, as in the first president of the United States). Lord John swears allegiance to the rebel forces, and then they must all work together to save William from the British. 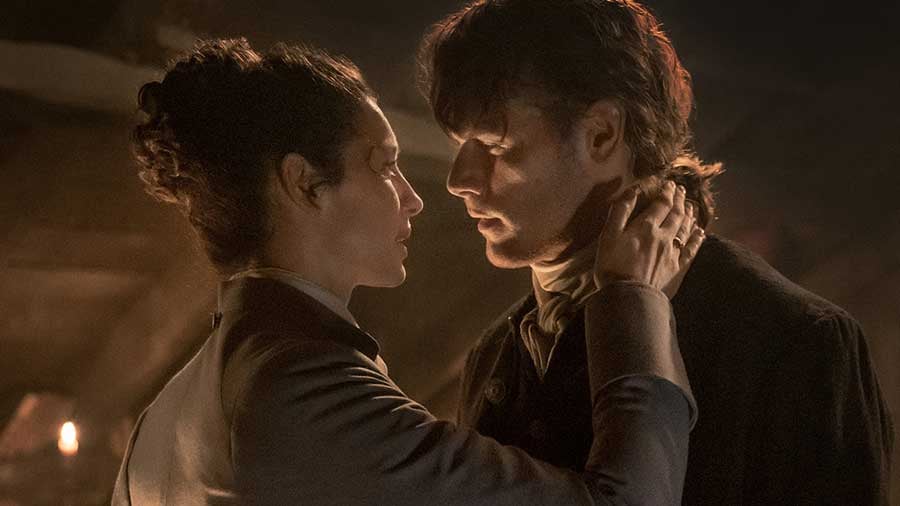 At times both Lord John and Ian are captured by the British, then Claire is shot as the mission turns to locating Lord John's nephew, Benjamin. Meanwhile, Fergus and Marsali's Philadelphia print shop burns down, and little 4-year-old Henri-Christian dies when he cannot escape the fire. This causes the Frasers and Murrays (Ian and his wife, Rachel) to move to Savannah, GA. Fergus, Marsali, and their two daughters settle there, while Jamie, Claire, Ian, Rachel, Jenny, and Fergus's eldest child, Germain, head back to Fraser's Ridge.

At the end of the novel, Brianna, Roger, and their two children return to Fraser's Ridge as well.

By this point, it is the summer of 1779, and Jamie and Claire are in their late 50s/early 60s. It will be rather amazing if Outlander makes it this far — and this isn't even the last book in the series!