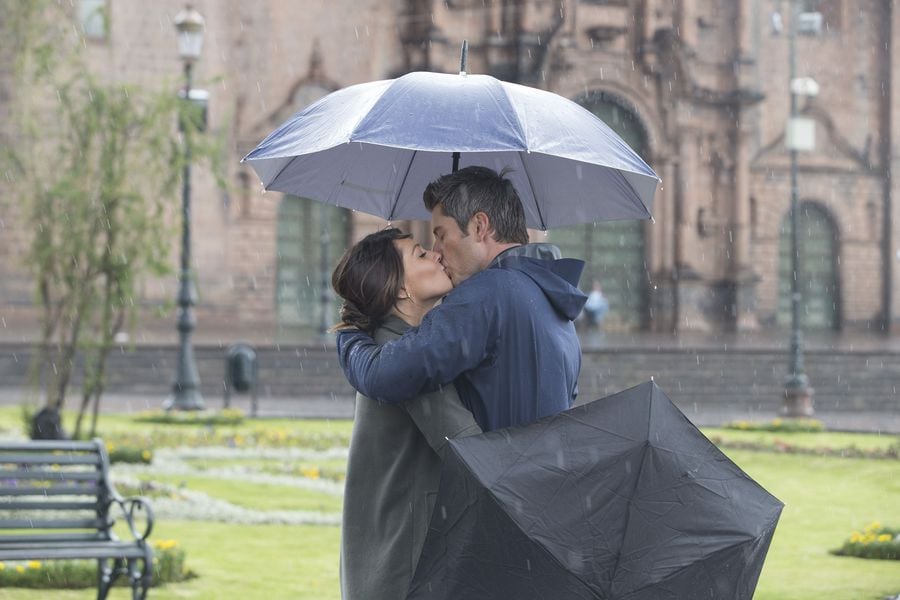 I've been a fan of The Bachelor franchise for as long as I can remember, and throughout the years there have been some "cross the line" moments that have irked me — like pretty much all of Juan Pablo's season — but Monday night's finale, more specifically the Becca Kufrin (aka Becca K.) and Arie Luyendyk Jr. post-final rose breakup scene, or should I say saga, really takes the cake.

ABC has been teasing a dramatic ending to this season, and they delivered, but at what cost? Before we get into the part that was way too dramatic for my blood, let's recap the finale really quick.

The final two ladies, both Becca and Lauren Burnham (aka Lauren B.) met Arie's family, as one does in the final episode of this reality series, and things were awkward to start. The family was constantly comparing the two women to each woman's face, especially on Becca's meeting, and it was clear that they thought she was "logical" choice (as did Arie, which isn't exactly a good thing).

When it came down to the final rose ceremony, Lauren got out of her car first and after pouring out her heart to Arie — and being more expressive than we've seen all season — he told her he couldn't do it anymore . . . date her being the "doing it" portion of the statement. As Lauren drove away, she couldn't imagine him proposing to Becca when he admitted that he didn't know his choice until a few hours earlier, and she might've been onto something with that observation.

Despite only deciding that morning, which yes, happens all the time on the show — but honestly the track record of men who are still with the women they chose on the show is so low (with Sean Lowe being the only Bachelor still with the original woman he chose and proposed to on the series) that maybe you shouldn't follow the normal pattern? — Arie went through with the proposal and asked Becca to marry him.

Related:
Ben Higgins Is Back in the Bachelor Spotlight, But Do You Remember His Final 3?

Chris Harrison then disclosed during the After the Final Rose (or at least the first part of this after show) that Arie had changed his mind and we were going to see it all unfold in an "unedited" capacity, which might sound exciting, but was really code for "long, annoying, and just plain mean."

When Becca arrived in Los Angeles for one of the many "Happy Couple Weekends" that the winner and bachelor have while the rest of Bachelor Nation is watching their love story unfold on TV, she beat Arie to the house and decided to explore. Little did she know that Arie had wanted to break up with her that day and instead try to date Lauren. Oh, and all of this was going to be filmed, because ABC is mean. Sorry, it's the truth.

Jade Tolbert summed it up perfectly, and we are still baffled by what went down on that no-so-happy date in Los Angeles.

To be ambushed on a happy couple's weekend is both nauseating and violating. Cameras did not need to be there. She showed him so much grace.

In typical Chris Harrison fashion, the show's host guided the live studio audience and viewers at home through what was going to happen next, and if I'm being honest, I really didn't need his side-eye and sassy faces after watching poor Becca get blindsided in the worst way possible.

Yes, I know, it's a reality competition and everyone knew what they were getting into when they signed on for the series, but this was a new form of torture for a contestant. She was blissfully in love and unaware that the cameras on their post-show date were really there to capture the heartbreak she was about to endure — and it was just wrong.

I'm not the only one who thought this by the way, Bachelor Nation was on fire last night, and Bachelor and Bachelorette alum were equally as outraged. Take JoJo Flecther, who pointed out that this is not what is supposed to happen after you win. "They don't FILM happy couple weekends . . . WHAT ARE THEY TELLING BECCA!?" she tweeted, and we want answers!

Related:
Taking Bets on the Next Bachelorette? Put Your Money on One of These Ladies

It really was infuriating to watch. The worst part, besides Becca's clear heartbreak, was that Arie lingered for so long. I didn't actually time it, but it felt like at least a half hour's worth of Becca walking around the LA house in disbelief after Arie told her he was "half in" on their romance and wanted to try it with Lauren instead, because he "woke up thinking about her, and went to bed thinking about her."

This is real man of the year award caliber comments right here, don't you think? It's so terrible!

Despite telling Arie to leave on numerous occasions, the guy stuck around and tried to comfort her. Sorry buddy, but after you rip out someone's heart, and basically fake her out on wanting to spend your life with her, you don't get to feel better by saying, "Well, want to hug it out?"

Becca switched locations throughout what seemed like the longest "unedited" breakup we've ever unwillingly witnessed on The Bachelor, and ABC seemed totally okay with making Becca endure more pain by sending Arie back into the house and then into the bathroom where she was crying. In fact, the creator of the series, Mike Fleiss, tweeted about the drama for the night, and his gross tweet really sums up the lack of sensitivity that became more and more clear throughout Becca's breakup.

Just decided the unedited scene is too intense and may not be able to air #TheBachelor pic.twitter.com/nUdh1kgPx6

We get it, breakups suck, and Arie wanted to show America that he tried to do the right thing by being "honest" with Becca before switching her out for the runner-up, but it didn't work. In fact, it backfired in quite a dramatic fashion. Becca was strong, fierce, and way too nice if we're being honest. She was in disbelief, didn't know what to say and wanted him to leave, but what happened? Arie stuck around, sat down on the couch, and then starred at her when she said for like the millionth time, "Please leave."

Related:
23 People Who Lost Their Sh*t While Watching the Heartbreaking Bachelor Finale

Lingering is not cool. ABC sending him back inside because she was crying was not cool. The whole thing was drawn out for TV and although I love a dose of drama on a reality love series as much as the next girl, this really was over the top and really wrong. Becca is great and yes, she can do better than Arie, but why was it necessary to see her go through the grief of being dumped after getting engaged for so long? She was clearly done with him and the discussion from the moment he started talking about leaving her, but we watched for minutes on end of her breaking down and why, because of ratings? Ya, that's low, even for you, ABC.