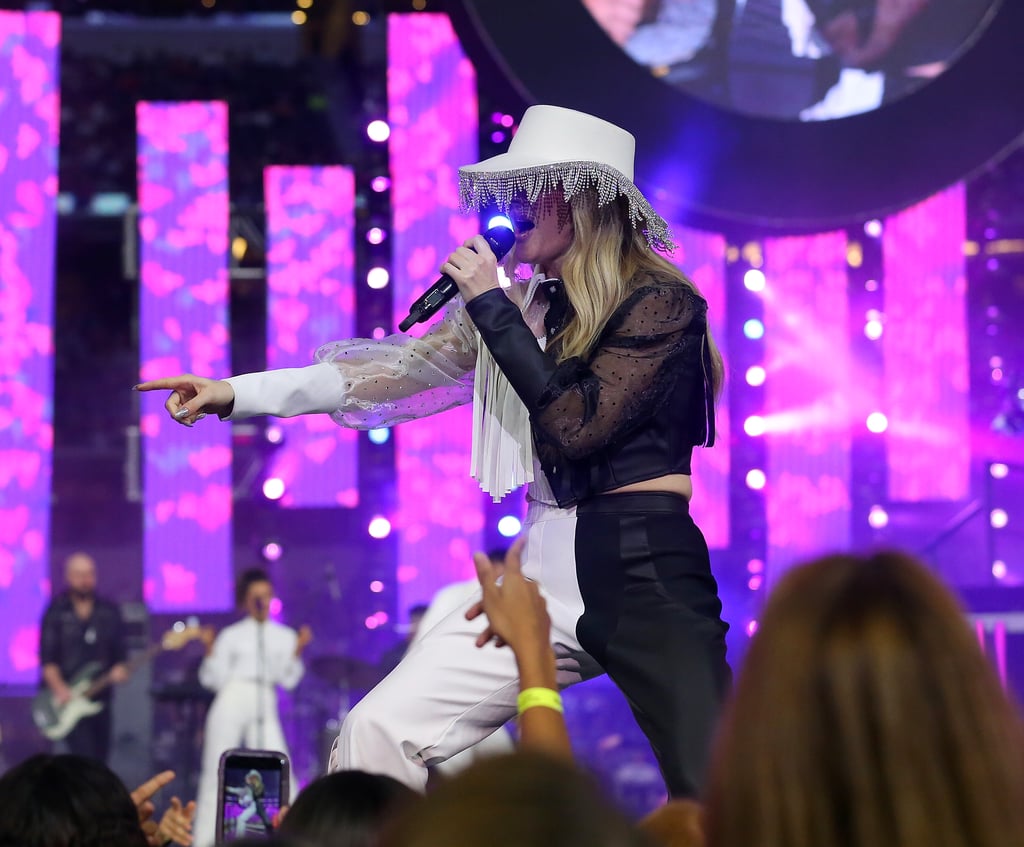 Ellie Goulding Wore A Sparkly Lampshade on Her Head, and We're Actually Loving This Look

Songstress extraordinaire, Ellie Goulding, kicked off the Buffalo Bills and Dallas Cowboys half time show in a sparkly, black-and-white, Wild West-inspired ensemble. She co-ordinated her look with a white, diamanté-fringed, cowboy hat, and the Internet can't get enough of how much her topper looks like a sparkly lampshade. While the Internet makes Goulding's hat the meme of the day, we're actually really into her festive look.

Goulding's performance look featured a half-black and half-white co-ordinating set of high-waisted wide leg trousers, and a cropped jacket with sheer bishops sleeves covered in rhinestones. Her cowgirl-inspired look was given a pop star update with diamanté, instead of classic leather fringe details. Despite Goulding's top-notch performance, it's her sparkly lampshade hat that has captivated the Internet.

The Twitter memes have already started rolling in: from users posting "Gonna Tell My Kids" this [lampshade] was Ellie Goulding, to Goulding's look being called "Sia cosplay", and even a few Spongebob references. We are absolutely fans of this look, and while the Internet might see it differently, there is one thing we can agree — on social media, reinterpretation is the highest form of flattery.

Diamanté fringe is a trend that has been bubbling up steadily this year, and because it resembles tinsel, it makes a perfect detail on your festive outfits. Even Billie Eilish is a fan of this trend, as she recently rocked it on the 2019 American Music Awards red carpet. On the runways, NYC brand Area has been leading the charge with it's well-received Fall/Winter 2019, and Spring/Summer 2020 collections of diamanté fringed pieces.

Keep reading ahead for every angle of Ellie Goulding's look, plus a few snaps of Billie Eilish's similar hat for reference.

British Celebrities
Florence Pugh Is the Best at Instagram, Our Sincerest Apologies to Every Other Celebrity
by Toria Clarke 6 days ago

Street Style
A Guide to Barrettes: How to Style Them and Where to Shop Them
by Sarah Wasilak 1 week ago