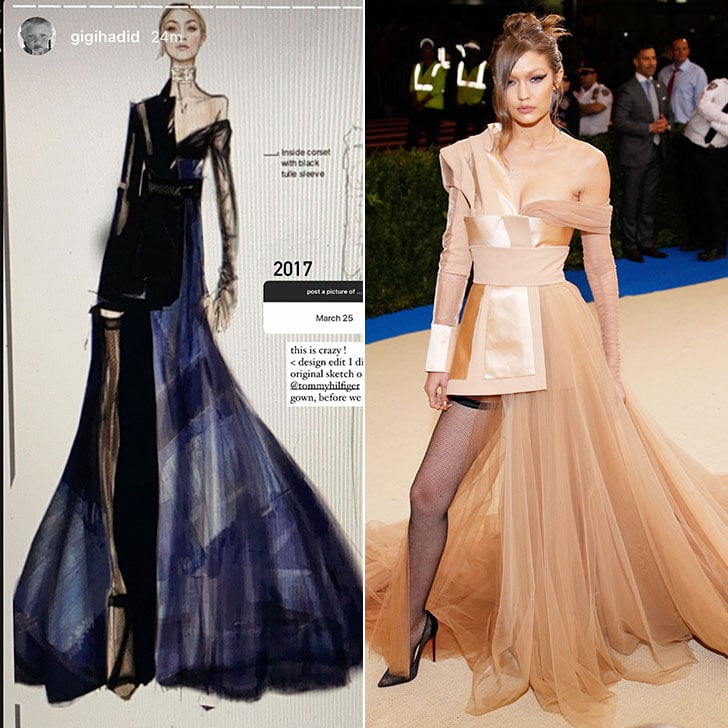 Gigi Hadid's Met Gala Dress Was Supposed to Have a Denim Train — See the Original Sketch!

Gigi Hadid is among the many celebrities answering to the "share a pic" challenge on Instagram Stories. While fellow supermodel Behati Prinsloo ended up sharing a never-before-seen snap of her Alexander Wang wedding reception dress for fans to see, new mom Hadid used the opportunity to grace us with a similar reveal. Gigi decided to go deep into her 2017 photo album archives, posting a pic of a moment from March 25, 2017, when her third Met Ball gown was being designed just about one month out from fashion's "prom night" at the Met.

Gigi worked with Tommy Hilfiger that year on her look (some might recall that she also attended the event in Hilfiger a year before, alongside her partner Zayn Malik). The asymmetrical design came with a long, tulle train extended from the fitted, structural bustier bodice with satin panels and a deconstructed sleeve. Gigi wore the same fishnet stockings and Christian Louboutin mesh pumps it appears she was always supposed to wear, even when her look was at first imagined in black and blue denim with a patchwork skirt.

"This is crazy. Design edit I did from the original sketch of my @tommyhilfiger Met Ball gown, before we made it beige," Gigi wrote on the photo. It also looks like Gigi would've worn a thick choker necklace had the Tommy Hilfiger team gone this route with the custom number. Even though this version of Gigi's gown would have been a cool choice for the "art of the in-between" themed Gala, we loved the end result of her outfit: a masterpiece in neutrals worth looking back on.