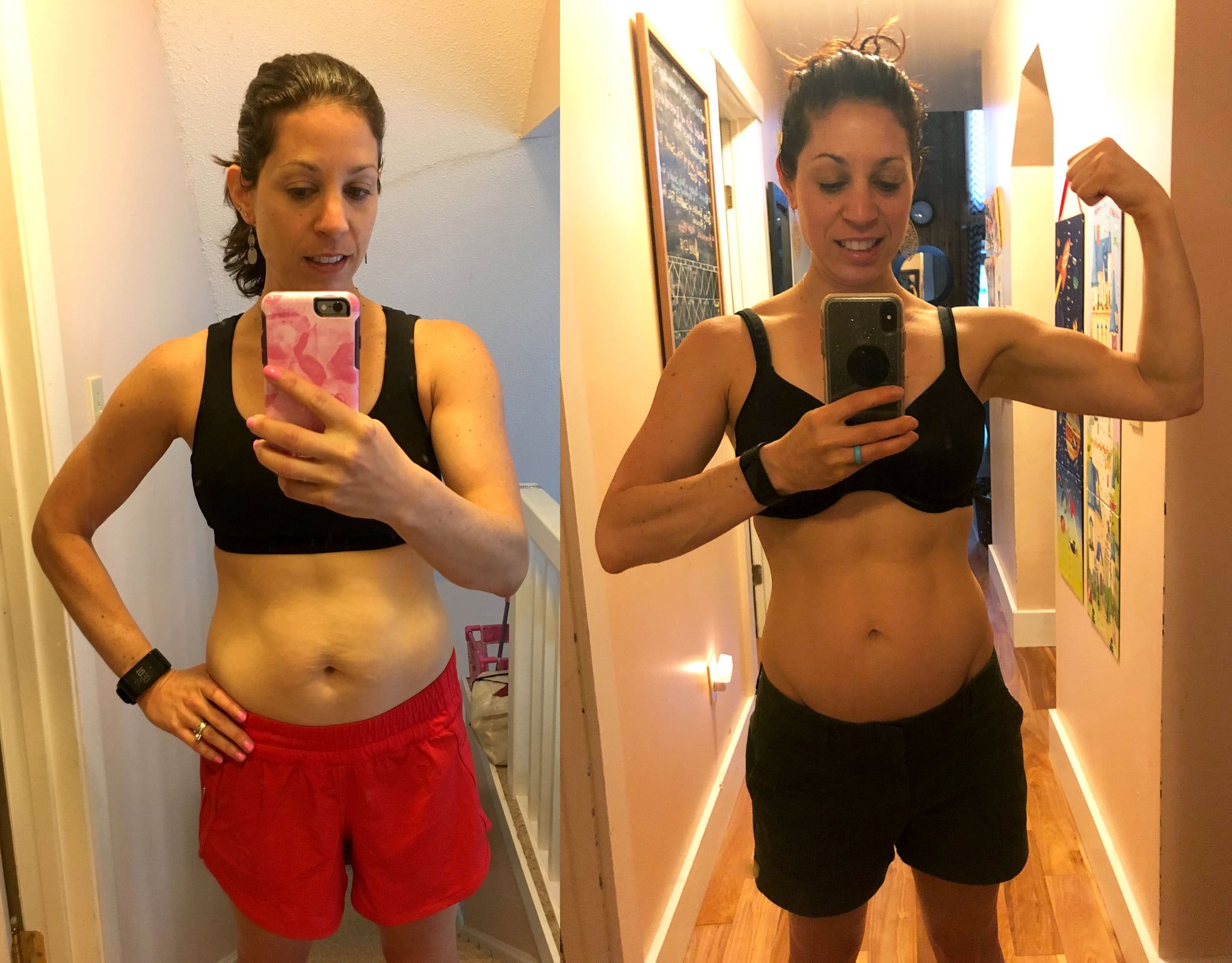 The photo on the left of me was taken July 2016, weighing 120 pounds (I'm 5'2"). I had just started going to CrossFit after a history of running and yoga because I wanted to get stronger, have more energy, and decrease the baby belly I had been carrying around for four years. The photo on the right was taken one year later after achieving my goals, but one thing was strange to me: I had gained weight. And now that I've been doing CrossFit for over three years, I've gained even more, and there's a 10-pound difference. How can a person look leaner but weigh more? Experts have the answer.

One of the reasons a person could gain weight but look leaner is from working out and gaining muscle, explained Larry Weilland, MS, an exercise physiologist at Northwestern Medicine Delnor Health and Fitness Centre. He explained that "muscle is more dense than fat, so an identical volume of it will weigh more than fat."

Exercise physiologist Krissi Williford, MS, CPT, of Xcite Fitness, agreed and said even though your muscle mass weighs more than your fat, "it takes up less space, which is why you look leaner and more toned."

Krissi said to think about it this way: "Your fat layer is like a heavy quilt. When you are covered with a heavy quilt, you can't really see that shape that's underneath. If you remove the quilt and use a thin bed sheet instead, you will be able to see the shape of the body underneath. The less fat you have, the more you can see what's underneath."

"As you reduce the amount of stored body fat you have under your skin, you will become and look leaner," Krissi said, but the scale may go up. Jessica said, "This is great, though, considering higher muscle mass raises your metabolism and energy levels."

If you combine the two above reasons and you lose fat in certain areas but gain muscle in others, Krissi said, you'll change the shape of your body and "have more definition and visibility of your muscles" and will look leaner. Larry added that proportionality also comes into play, and he explained that "building muscles in certain areas (chest, shoulders, lats, thighs) can make a person who has the same waist size as another who isn't so muscular look leaner."

Increased blood volume could also explain weighing more and looking thinner. Larry said people who increase their cardiovascular capacity usually also experience an increase in blood volume, which results in higher cardiac output, and that increased fluid can contribute to weight. Yet another reason could be increased glycogen storage. "Glycogen is associated with water in the body, so like muscle, is more dense than fat," Larry said.

Thoughts About the Scale

To look lean or toned, you absolutely want to build muscle and reduce fat, but Krissi emphasised that "the scale isn't always the best measure of your results, although it is really easy to get hung up on those numbers." She recommended that people take pictures every two weeks to see visible changes and to also take body measurements. Jessica also said to use how your clothes fit as a guide. Monitoring these instead of obsessing about the scale will help you see your progress and feel great about the changes you're making in your body.

Krissi wanted to remind us that "muscle is actually a beautiful thing. It stokes your metabolism, shapes your body, and makes you strong and confident." Having muscle will make you look and feel more amazing than you already are, so don't let what the scale says take away from that feeling!