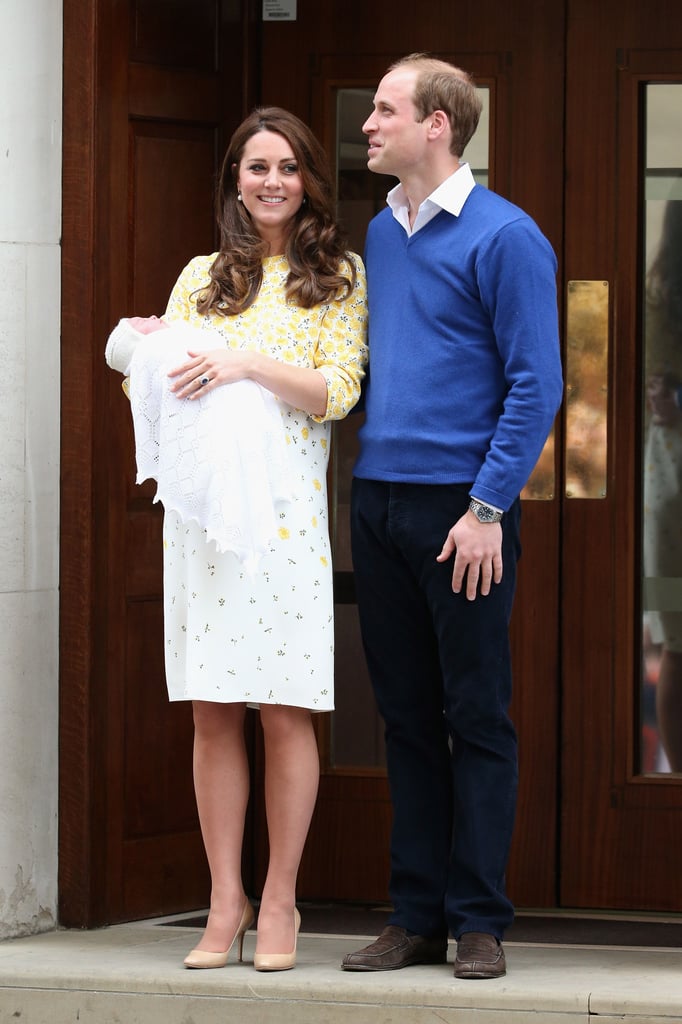 Three times in the last five years, the Duchess of Cambridge has stepped out onto St. Mary's hospital steps just hours after giving birth, holding a newborn baby while wearing a gorgeous dress and heels, with her hair and makeup done. It's definitely not the norm for new mums to roll out of the hospital in this manner, but for Kate, a royal, it's tradition — however, Kate doesn't engage in this tradition without having things her own way. Although Princess Diana chose to cloak her postbaby body in loose dresses after her two births, Kate chose dresses that highlighted her postpartum belly just so and totally owned it.

And then Keira Knightley tried to make her an example of the societal expectations on women who give birth.

In an essay titled "The Weaker Sex," Keira outlined her birth experience with her now-3-year-old daughter, Edie, and noted the expectations put on famous women to be ready to make pristine on-camera appearances immediately after birth.

"We stand and watch the TV screen," Keira recalled of the day Kate gave birth to Princess Charlotte in 2015. "She [Middleton] was out of hospital seven hours later with her face made up and high heels on. The face the world wants to see. Hide. Hide our pain, our bodies splitting, our breasts leaking, our hormones raging. Look beautiful. Look stylish, don't show your battleground, Kate. Seven hours after your fight with life and death, seven hours after your body breaks open, and bloody, screaming life comes out. Don't show. Don't tell. Stand there with your girl and be shot by a pack of male photographers."

"Keira is obviously entitled to her own opinion, but it was very much based on her own experiences and not of Kate's. Not every mother feels the same way."

Despite the threads of truth sewn into Keira's essay based on her personal experiences, Kate didn't necessarily feel that Keira's words represented her experience accurately.

"Keira is obviously entitled to her own opinion, but it was very much based on her own experiences and not of Kate's. Not every mother feels the same way. Keira's comments were simply for attention and they weren't justified," a palace source told Us. Adding, of the photos taken of her outside the Lido Wing after all three of her births, "She wouldn't have done the photo call a second and third time if she was uncomfortable."

Although it's true that we still have a ways to go as a society when it comes to accepting real and raw birth experiences and what new mums go through before, during, and after having a baby, every mum has a different experience and shouldn't be put down for the choices she makes at any step — whether that's choosing to sport heels and a blow dry seven hours after birth or not.