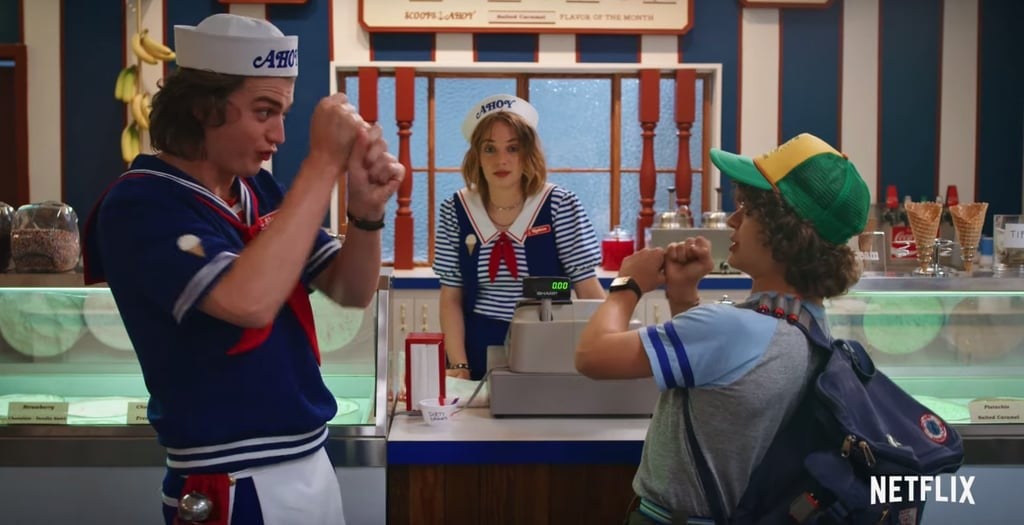 After what feels like an eternity stuck in the Upside Down, the third season of Stranger Things will soon be upon us. We've finally gotten some juicy details to make the July 4 premiere even sweeter, too. The official trailer dropped on March 20 and the new footage gives us our first real look at Hawkins since we last saw Mike, Will, Eleven, and the rest of the gang escaping a battle with the Mind Flayer. Not only do we see new dynamics among our old favourites that cause friction, but the trailer also gives us a peek at some mysterious new faces in the not-so-sleepy town of Hawkins — including Steve's new coworker, Robin.

Played by 20-year-old actress Maya Hawke, Robin works with Steve at a nautical-themed ice cream shop at the Starcourt Mall. We first saw her in the '80s-tastic teaser for the new season way back in July 2018, and the latest trailer reinforces her aura of a too-cool-for-school teen who is basically over everything. Netflix's previously released description of Robin mentioned that "she seeks excitement in her life and gets more than she bargained for when she uncovers a dark secret in Hawkins, IN," which makes sense since we see her with the group in a few clips.

Considering the fact that we know Starcourt Mall will feature heavily in a lot of the action this season (it's even featured in the name of the eighth episode), it makes sense that Maya would inevitably be drawn into the craziness that surrounds it. Especially if she's hanging out with Steve at work (and Dustin by extension, since they're bros). She seems understandably concerned about the fact that Steve hangs out with a group of kids younger than him (which, rude, they're basically teenagers and he's their badass babysitter), but we have a feeling they'll grow on her soon enough. Check out what we've seen of Maya ahead and get ready to learn more when Stranger Things 3 premieres on July 4!

Related:
Eleven Fights to Save Hawkins — and the World — in a Dramatic New Stranger Things Trailer
Previous Next Start Slideshow
NetflixStranger ThingsTV
Around The Web