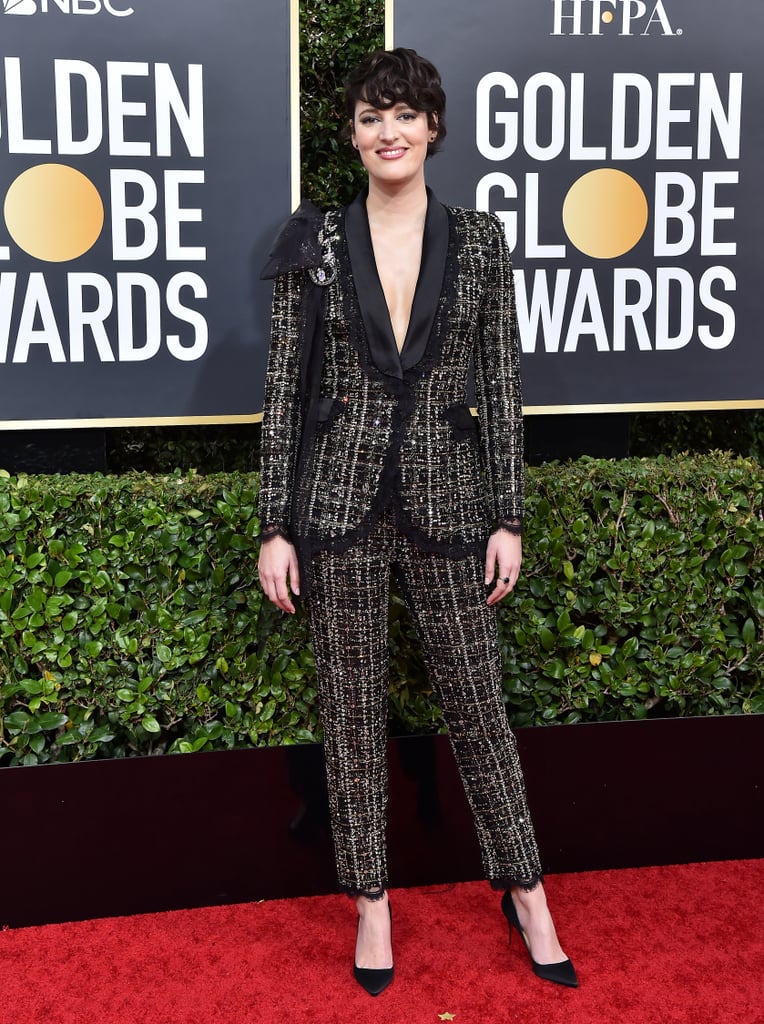 Phoebe's designer suit is from Ralph & Russo's 2019 couture collection. It features black-and-white tweed with a black lace trim on the hemlines, a black silk tuxedo lapel, and a black silk-organza bow on one shoulder with silver crystals covering the entire look. The suit was custom designed for Phoebe, but fits a UK size 12. It was purchased on eBay by an anonymous buyer for $40,000 (£21,000), and signed by the actor herself.

After accepting her Golden Globes award, Waller-Bridge pledged backstage that she would auction the suit and donate the money raised toward the Australian fire relief. The announcement was made by entertainment journalist Andrea Mandell on Twitter: "Backstage: Phoebe Waller-Bridge says she is auctioning off her Ralph & Russo #GoldenGlobes suit to raise money for the Australia wildfires." Mandell confirmed Waller-Bridge's pledge that "the money that is raised will go towards relief in Australia."

This incredibly philanthropic move by Waller-Bridge joins other celebrities, like Pink, Celeste Barber, and Nicole Kidman, who have donated hundreds of thousands of pounds to bush fire relief services in Australia.

Keep reading ahead for every angle of Phoebe Waller-Bridge's fabulous and philanthropic Ralph & Russo couture suit ahead.

Related:
Big Puff Sleeves Is the First Major Fashion Trend of 2020, According to the Golden Globes
Previous Next Start Slideshow
British CelebritiesFleabagPhoebe Waller-BridgeRalph & RussoSuitAustraliaRed Carpet
Around The Web