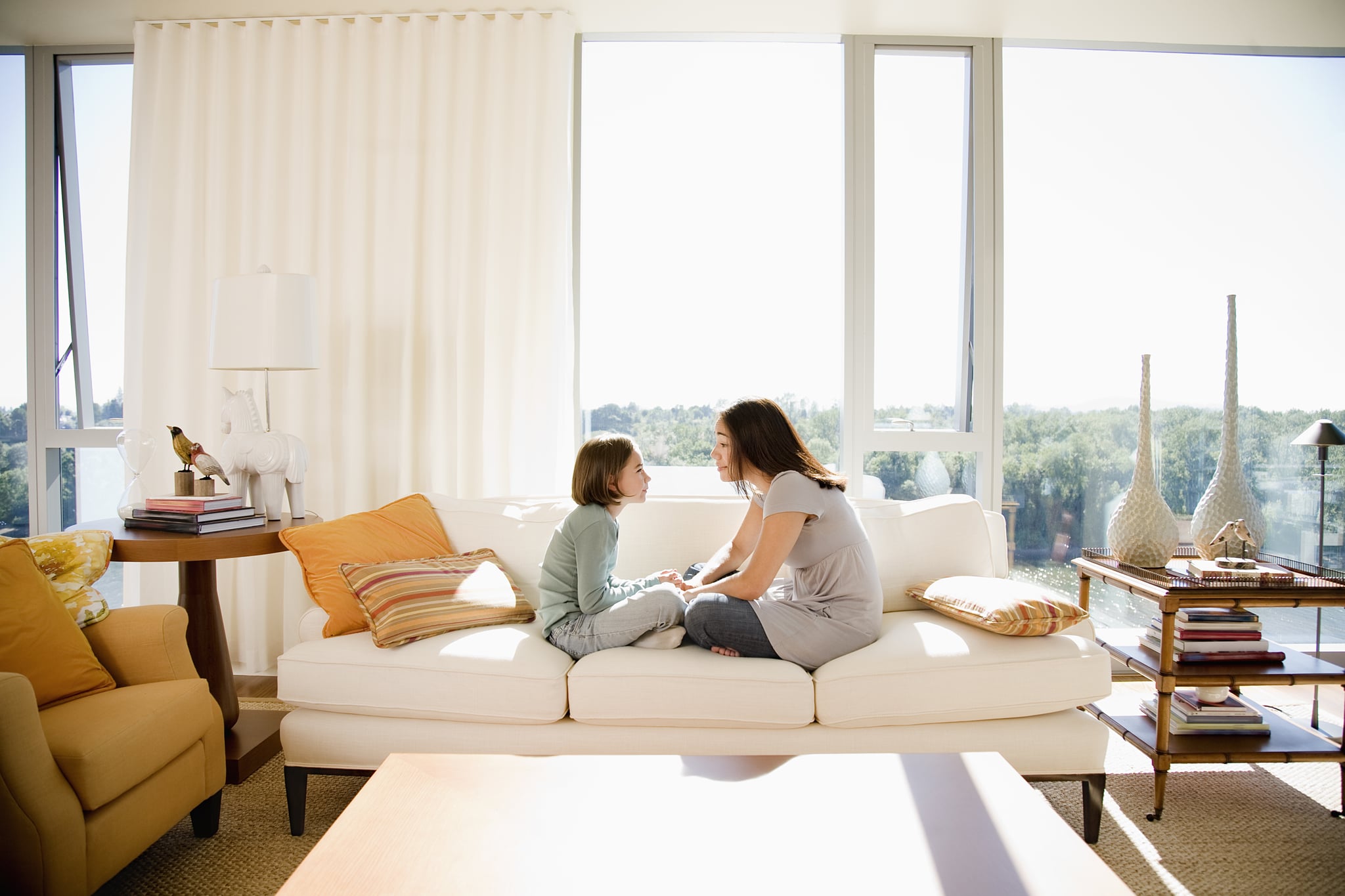 In kids, racism can be less obvious — it's bullying or exclusion or the labelling of someone as "bad" for no other reason than they look different from their peers. It's because kids pick up on differences more acutely than we think, even if they don't yet understand exactly what those differences are.

But even those small moments of unchecked racism and prejudice can have dire consequences. So while parents hope their children will speak out and either identify racism when it happens to them or defend the BIPOC around them, those actions start with the conversations you have at home. Here's how to instill those values, according to teachers, doctors, psychiatrists, and more.

Related:
9 Expert Tips to Help You Talk to Your Kids About White Privilege

How Should I Teach My Child to Respond to Racism?

When teaching kids how to respond to racism, the fear of messing up can seem paralyzing. But according to Fiona Johnston, an elementary school teacher based in Charlottesville, VA, it's an anxiety we need to overcome. "We can't protect the kids from this," she said. "We need to be upstanders if we want to change anything about this country."

An upstander is a person who takes action and stands up against injustice when they see it occur. Upstanders are generally opposed by bystanders, which are people who see injustice occur but don't do anything about it. Tracye Williams, an elementary school teacher based in Oxnard, CA, with more than 20 years of experience, said that when her students witness racism happening to someone else, many of them don't know how to be upstanders. A few of the fifth-grade students in her community will speak up with simple phrases like "It's wrong!," but the vast majority respond with silence. "[It's] as if these students were reflecting upon their own flawed beliefs, or the words that were said behind the closed doors of their homes," Williams said.

To help kids practice upstander behaviour in a safe environment, Dr. Harvey Karp, pediatrician and cofounder of the Happiest Baby Foundation, suggests role-playing a few scenarios with your child. To do this, use your child's dolls or toys and act out what an upstander might do if they saw someone being bullied for the colour of their skin. "Like actors who practice a lot to learn their lines, the more you role-play important life lessons with your child, the faster [they'll] learn what is right and wrong and remember it and do it in the future," Dr. Karp said.

When role-playing, Williams said, some other effective behaviours to teach your child include finding an adult or very simply telling the offender to stop. Start with easy first steps kids can use to deescalate the situation without putting themselves in danger. If your child experiences racism themselves, Williams said, they should first be taught to get away from their attacker and find an adult to help, which can also be role-played. Assertive language and phrases will come later.

When Should I Start to Teach My Child to Respond to Racism?

To Williams, it's clear that kids need to learn how to address racism at a young age, given the behaviour she's seen after teaching in low-income communities. From listening to Mexican students label their Black classmates as "no good" to hearing students from emotionally disturbed households use the n-word in class, she knows racism is present in kids, whether it's been explicitly taught or not. Or as in Heather Davis-Puerzer's second-grade class in Pittsburg, CA, with young Black girls colouring themselves in with peach crayon and other students of colour exclusively using the term "American" to describe their white teacher. In one classroom, children insult each other by calling their classmates "Black" without fully knowing why, while in another, they shun the people in the room who don't look like them — clear evidence that prejudice starts internally.

Research supports both teachers' observations, with studies proving infants as young as 6 months can identify and categorize people by race. As kids grow older, 2-year-old toddlers begin to form racial categories that help them make sense of others, and preschoolers start to report negative attitudes toward people who don't look like them. Whether they're taught how to contextualize it or not, children notice race, and they are fully capable of developing racist biases themselves.

It's important to teach them early on as they develop their own personal beliefs.

Since the research clearly indicates that kids are less preoccupied with race and colour the younger they are, it's important to teach them early on as they develop their own personal beliefs. As Williams noticed in her own experience, younger kids are actually more likely to speak up or befriend a child who has been insulted, and they're also more receptive to having discussions about race. One way parents can capitalize on this, according to Dr. Karp, is by pointing out others who act as good allies.

"This is not a big lecture, just some casual comments on things you see people doing in books, on TV, or in real life," Dr. Karp explained. He suggests trying comments like "Look at that. See how he helped that man get back up?" and stressing your approval as a parent. This is one way to start showing children as young as toddlers what good allyship looks like, even if they can't have a full-on conversation about it.

Another strategy Johnston recommends to help your child form healthy opinions about race is to find some kind of diverse environment for them to be a part of, even if it's just a club or playgroup. "Kids, if they grow up with a diverse environment, they realise that people are the same, no matter what their race," she said. "But if they don't, if they stay segregated, then they're really vulnerable to the unconscious biases."

Of course, this is just the groundwork that needs to be laid for children to grow more accepting of each other's differences. Later on, as kids get older and begin to ask questions (especially uncomfortable ones), Dr. Karp said, parents can initiate deeper discussions by asking their children what they're noticing. Direct language and conversation starters like "Did you see all the people on the TV who were yelling? I wonder why they are doing that. What did you see or hear? Why do you think they are doing that?" will help older kids speak more openly about tough topics. Questions like these can also give parents a sense of where their kids are at and what is worrying them the most, which will drive the conversation in a productive direction.

What Should I Teach My Child to Say in Response to Racism?

Once children understand the importance of speaking up, the next step is knowing what to say. According to Dr. Anandhi Narasimhan, MD, a double-board-certified child, adolescent, and adult psychiatrist, parents can start by encourageing their child to use simple, assertive phrases like "We shouldn't be talking about people that way" or "I like the way he/she/them looks" when they see racism happening to someone else. Even something as simple as befriending a person who is perceived as different or inviting a student of colour to join them at lunch can be a great way to support someone who has experienced racism, Williams said.

Parents can start by encourageing their child to use simple, assertive phrases like "We shouldn't be talking about people that way" or "I like the way he/she/them looks."

But it's not just white allies who should learn how to respond to racism. Kids who experience racism themselves can also be taught useful phrases to stand up for themselves in the moment. Dr. Narasimhan recommends trying expressive language like "That doesn't feel good to be called that" or "That is not respectful" before finding an adult facilitator to help. Williams adds that aside from comments like these, children shouldn't be expected to give any type of deep verbal response after being bullied. Instead, parents should teach their kids to distance themselves from the perpetrator, report the incident, and seek an adult to help navigate the situation. Dr. Narasimhan said it could also be helpful to explicitly remind your children, "You can come to me if you're being hurt," and to do periodic check-ins to make sure everything is OK.

Additionally, to help kids learn the right things to say and do, parents can use historical examples, pointing out how other allies stood up against racism in the past. Dr. David Nurenberg, Ph.D., an associate professor of education and author of What Does Injustice Have to Do With Me?, specifically suggests white Freedom Riders like Abraham Joshua Heschel, Donald Woods, Helen Sussman, and David Vann. Real people, not saints, who used their privilege to stand up and work alongside people of colour. In Davis-Puerzer's classroom, people of colour like Martin Luther King Jr., Ruby Bridges, and Harriet Tubman are other role models kids are taught about as they learn how to stand up against racism and injustice.

However, Davis-Puerzer said sometimes kids, especially BIPOC, have difficulty standing up against racism because they have internalized it. For instance, Black students start to genuinely believe they are less than their white peers. To prevent this from happening, Davis-Puerzer uses lesson plans that talk about many different cultures, emphasising things like self-worth, uniqueness, and cultural pride. "Each kid, when we got to what their culture did, felt like 'Oh my gosh, I have a place,'" Davis-Puerzer said. She also found that explicitly teaching children that their skin colour is beautiful goes a long way in helping them stick up for themselves and feel more valuable in their own skin.

Related:
A Family Member Says Something Racist In Front of Your Kids – This Is Your Next Move

What Resources Are Available to Help Me Learn More?

For parents looking for additional resources to reinforce these messages, books and videos are good places to start. Johnston suggests a story she read with her own class called Front Desk, which covers important topics like discrimination and immigration through the perspective of a young Chinese-American girl. Dr. Jennifer Jipson and Lee Scott, child development experts on the Educational Advisory Board at The Goddard School, also recommend Whose Toes Are Those? by Jabari Asim and Ten Little Fingers and Ten Little Toes by Mem Fox.

For older kids in preschool or kindergarten, Dr. Jipson and Scott say parents can try We're Different, We're the Same by Bobbi Kates and Lovely by Jess Hong. Plus, on the video front, Davis-Puerzer suggests this compilation of kid-friendly videos that cover various antiracism topics, and you can also check out these movies that discuss race for older tweens and teens.

No matter what materials you decide to use with your family, the most impactful thing is to make these conversations a normal part of your life. Whether kids are learning how to stand up for themselves, defend someone else, or both, odds are they've already begun to see racism in their daily lives. As Johnston explained, if you're still holding back or waiting until your children are older to start talking, remember the consequences of not speaking up.

"Kids have such open hearts, and they're compassionate and empathetic," she said. "If we teach them young, then we could have a very different world."