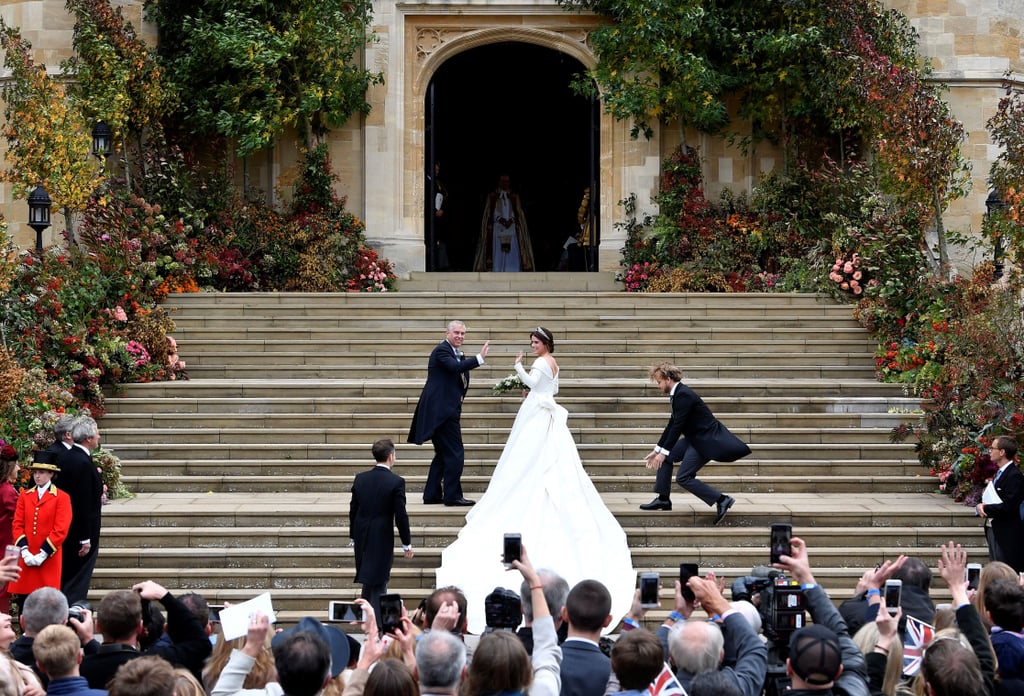 It's official — Princess Eugenie and Jack Brooksbank are husband and wife! The couple tied the knot at Windsor Castle's St. George's Chapel (yep, the same place where Prince Harry and Meghan Markle got married) on Oct. 12, and the royal affair was straight out of a fairy tale. The 28-year-old princess looked positively radiant in an opulent white gown designed by Peter Pilotto, and was escorted by her dad, Prince Andrew. Jack, on the other hand, cut a suave figure in a traditional morning suit and couldn't have looked any happier as he watched Eugenie make her way down the aisle.

Eugenie and Jack exchanged vows in front of their nearest and dearest, including Princess Beatrice, Sarah Ferguson, Queen Elizabeth II, Prince William, and celebrities like Ellie Goulding, Liv Tyler, Naomi Campbell, as well as a heavily pregnant Pippa Middleton. Prince George and Princess Charlotte served in their wedding party as a page boy and flower girl, respectively, along with Beatrice, who was Eugenie's maid of honour. Just like Harry and Meghan, Eugenie and Jack also invited 1,200 members of the public to be part of their special day. How sweet, right?

Eugenie first met the wine merchant during a ski trip in Switzerland in 2010 and got engaged this past January. "[It] was love at first sight," Jack said during their first interview as an engaged couple. "We met when I was 20, he was 24," Eugenie added. "[We] fell in love. We have the same passions and drive for life." Congrats to the newlyweds!

The Royals
Prince Charles Honours Prince Philip in Video Message: "I Miss My Father Enormously"
by Kelsie Gibson 6 hours ago