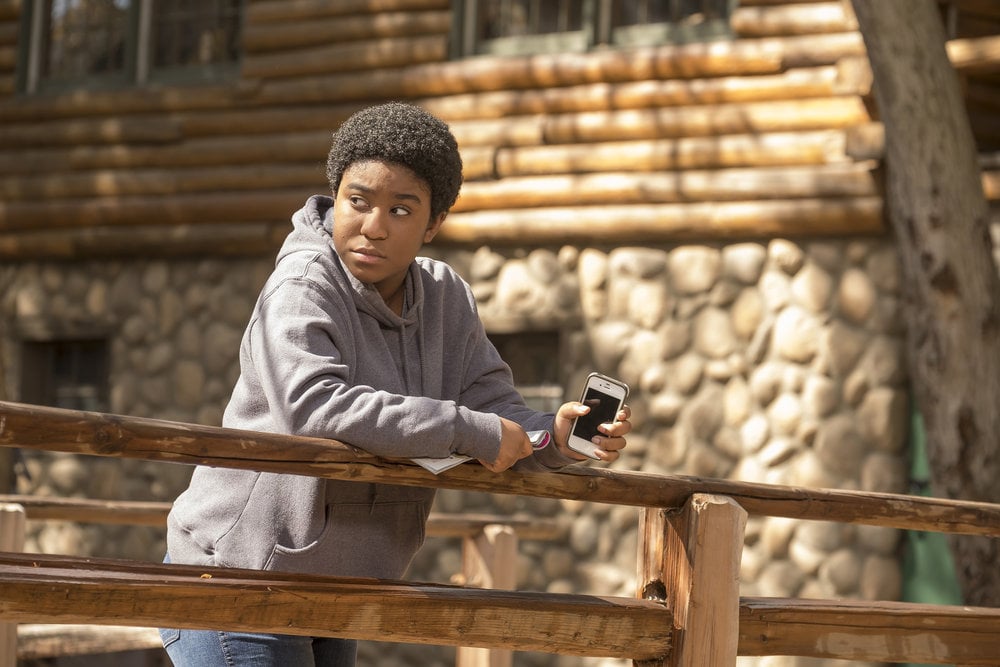 Randall Pearson, proprietor of all things uplifting and inspirational, is about to find out that his beloved, paid-in-cash Mercedes-Benz has been hit. The culprit? A triggered and enraged Déjà. While the season two finale of This Is Us brought out our emotions, there was no one more in their feels than Déjà. Early in the episode, Beth reveals to her cousin Zoe that their foster child has been irate and acting out since going to court and learning that her mother, Shauna, is giving up all parental rights so the Pearsons could officially adopt her. An overwhelmingly kind and well-off family adopting you is the best thing to ever happen, right? Rainbows and butterflies and celebrations? Well, not quite.

In the penultimate episode of season two, "This Big, Amazing, Beautiful Life," we learn a little bit more about Déjà's relationship with her mother and her fearful childhood. We learn about the loss of her great-grandmother and the traumatic life of foster care. And although we have yet to find out much about Déjà's father, we do know that he is a point of contention for the young girl. Despite begrudgingly wearing a dress to Kate and Toby's wedding and cracking the tiniest smile, all it took was one comment about "her father" for Déjà to unravel.

Toby's mother tells Déjà that she looks *just* like her father (foster dad Randall) and she explodes, taking all of her anger out on Randall's car with Jack's old baseball bat. It's easy for us to be mad at Déjà for coming for our favourite TV family like that, but there's a dark reality about this situation — and the truth is, we have no idea the types of demons she's battling emotionally. Following the episode, one Reddit user explained why they were pleased with the way the show is covering Déjà's anger, and it's going to put it all in perspective.

"As someone who works with at-risk teens, I felt this was a super genuine and realistic turn for her story to take," Reddit user WallSugar wrote. "I think people are forgetting she's a teen who's been through intense trauma and now feels abandoned AND likely feels conflicting emotions (guilt, love, sadness, relief, etc). I would be super disappointed if she immediately assimilated into the Pearson family."

[SPOILER] Deja in the season finale. from r/thisisus

It's true: Déjà is dealing with so many different emotions, most of which she probably doesn't have the coping skills to handle. She resents Beth and Randall for making her face the reality that Shauna isn't a good mother, but also is so grateful that they're giving her a new life, and likely feels guilty for that.

Randall's car may have been a convenient victim of her anger, but Déjà is simultaneously smashing the "big house, fancy car" mentality she previously discussed with Randall.

Related:
Never Fear, This Is Us Fans: Randall and Beth Are Going to Be OK

"She feels like a complete outsider (mirroring Randall's own childhood) and needs to find her own way without others telling her where she belongs and who she is," Reddit user SamanthaLiz added. "Smashing the 'fancy car' makes PERFECT sense and I think the backlash from it will surprise her as Randall and the Pearsons will still choose her. Flaws and all. And in turn, she will choose back. On her own terms."

This may be the first time we see an angry side to Déjà, but all signs are pointing to the idea that it might not be the last. Knowing Randall and Beth, this won't change their desire to welcome her in their family, but now it's just a matter of how far Déjà will push them.